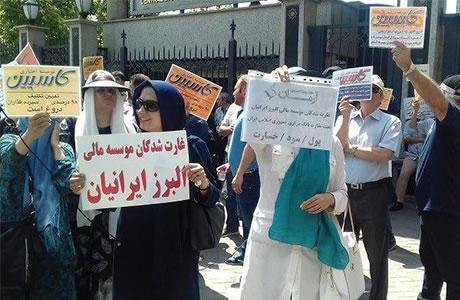 Women were actively involved in a big rally held outside the Central Bank in downtown Tehran on Tuesday, August 7, 2018, where people defrauded by Caspian and other fraudulent financial institutes had gathered to protest. Holding various placards, they chanted along with other participants, “Our money was a deposit, treachery is what you did to it.”

Other acts of protest were held by landowners on Sunday and Monday, August 5 and 6, in Kowsar township, in Hashtgerd, one of the cities of Alborz Province, located west of Tehran Province.

Participants protested against confiscation of 1,200 pieces of lands which are legally owned by 2,000 families. They gathered outside the Crusade Building in Alborz Province. Women were actively involved in this protest, too.

Plundered women regularly hold protests every week, particularly in Tehran, Rasht and Mashhad. Participants protest being cheated by companies which are backed by the Central Bank. They demand reimbursement of their “life savings.” They also chant slogans, expressing their demand to be covered by the state radio and television.

Plundered women were actively involved in at least 23 protests in cities across Iran in the month of July.  Women participated in at least 80 acts of protest throughout the country in the same period.

In another development, Mrs. Farangis Mazloumi, mother of political prisoner Soheil Arabi, travelled several times between the court and Greater Tehran Penitentiary on Tuesday, August 7, 2018, hoping to be able to visit her incarcerated son.