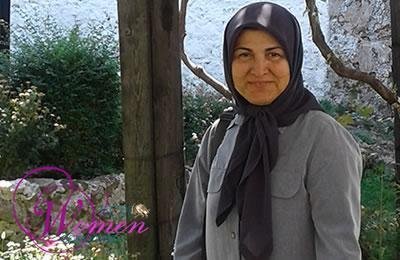 She is lively, happy and energetic.

The passage of time seems to have had no effect on her.

Her resistance and determination in struggle continues with the same vigor, passion, and joy that she had as an active young woman in the streets of Tehran.

This is how she describes her life story:

My name is Maliheh Shishebor and I was born in Tehran in 1960 in a family of 5 sisters and 3 brothers.

My sister, Shokooh, who was 5 years my elder and whom I loved dearly, along with her husband, Seyyed Kamal Araabi, sacrificed their lives for the freedom of Iranian people in 1988.
Shokooh was kind-hearted and known for her generosity, compassion, and encouragement of others. Everyone loved her, too, from the bottom of their hearts.
And for me and my younger sister, Maryam, she lives on.

To explain how I became acquainted with the PMOI (the People’s Mojahedin Organization of Iran), I need to flash back in time.

Our family had become politically involved in 1972 when I was just an adolescent. It was in the course of our family relations with other political families that I became familiar with the notion of struggle and resistance.

At 13, I began reading books about revolutions and activists. During my school years, despite being very close to all my classmates, but I was always looking for people who had political aspirations. This curiosity finally led me to activities against the Shah’s dictatorship along with some very close friends at Dooshizegan high school in Tehran’s Moniriyeh Square. We used to take a small radio with us to school and secretly listen to the news of opposition groups.

We used to disseminate leaflets against the ruling dictatorship, advocating democracy and political freedom in Iran. I used to get those leaflets through my own friends or through some of my sister’s friends, as well as some family friends.

Then came the era of the anti-monarch revolution in 1979. During the revolution and shortly afterwards, the PMOI’s activities began to proliferate in the south of Tehran, and I became involved with the organization and their activities.

I was studying Industrial Health at the time but I would have rather go to the impoverished neighborhoods of south Tehran to get a taste of the bitter realities of our society.

I worked for two and a half years in Khazaneh, Yakhchi Abad and Nazi Abad communities. My work involved selling the PMOI’s newspaper and setting up book stalls, which were repeatedly targeted and attacked by club wielding hoodlums hired by the regime. We were often brutalized for the sole “crime” of our political activities.

It was on September 24, 1981, when I was arrested by Nazi Abad’s 13th Police Committee, and immediately taken to prison.

I was under interrogation for about one year and spent a total of 7.5 years behind bars.

On the day of my arrest, I was taken to a secret house located at Be’sat Intersection across from Khazaneh Terminal. From the very first moment of my arrest, I prepared myself for everything, torture, interrogation, poor prison conditions, and all sorts of relentless evil ensues one could expect for a 21-year-old girl like me.

Akbar Khoshgo tortured me under interrogation in Branch 4 of Evin Prison. He was followed by another torturer called, Majidi.

The interrogation period was a difficult and painful period, but for me the secret was “Resistance.”

I had learned through experience that if I resisted during those most difficult moments, I would tire and wear out my enemy.

In prison, they usually allowed visitors once a month which only my parents were permitted.  And once a year during the (Iranian) New Year, my sister and brother were allowed as well.

In all honesty, I must acknowledge that my parents endured more torture during my imprisonment.
My father suffered five strokes in the 80’s because of hearing bad news of arrests and detentions. My mother was suffering both physically and mentally but she never hesitated to support the Mojahedin.

Talking about the prison years is one of the hardest things for me. Maybe that’s because every one of its moment was charged with the pain of losing a beloved friend:
My dear friend and sister, Ashraf Jalali, a 19-year-old student of the School of Sciences at the University of Tehran, who survived only 5 days in Evin. Her perseverance under torture was epical. Her torturers got tired of her resistance and quickly executed her, to take revenge from her and also to teach a lesson to other prisoners.
Nadereh Afshar, 19; Monir Karbalaii Qomi, 19, a dentistry student; and Mahtab Izadi, 17 and a student, were also my dear friends who were executed after unparalleled resistance and perseverance.
And many other names and faces …

After I was released from prison, I felt the world had become very different. I could no longer stay at home and live an ordinary life. So, I endeavored to reunite with the PMOI and fortunately, I succeeded in going to their camp in Ashraf.

Looking back at all those tortuous years filled with tears and testing challenges, from adolescence to youth, in jail and after, in Ashraf and even now, I feel that despite all the hardships and pain, I have overcome. This path has allowed me to truly appreciate the beauty of life in every moment of this struggle, with every choice I have made and every price I have paid.

Today, I am convinced that the true joy of humanity emanates from one’s love for her/his cause and from every step he/she takes to realize it.

And this is the secret of happiness, for me and for all of my comrades threading on the same path with me.