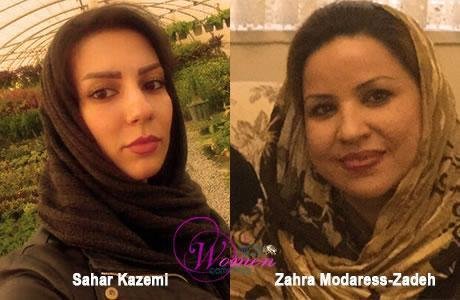 Sahar Kazemi, a civil rights and environmental activist and an athletics coach from Sanandaj, was arrested at home on Thursday, August 9, 2018, and transferred to an unknown location.

Sahar Kazemi was arrested because of being a civil rights and environmental activist and an athletics coach.

Sahar Kazemi had been summoned several times to the Intelligence Department of Sanandaj where she was interrogated.

Sahar Kazemi’s husband, Madeh Fat’hi, was arrested last autumn and held for three months in a solitary cell in the detention center of the Department of Intelligence of Sanandaj.

Some 75 members of a group of environmental activists have been arrested since February 2018 on the charge of espionage.

In another development, Zahra Modarres-Zadeh was arrested on Thursday, August 9, 2018, by security forces in Karaj, 20 kilometers west of Tehran.

Zahra Modarres-Zadeh is a civil activist and one of the supporters of Mohammad Ali Taheri, a death-row prisoner of conscience who advocates a new school of philosophy.

Before Zahra Modarres-Zadeh, her husband, Reza Bozorgmehr, had been arrested. Security forces used his cell phone to call his wife and set an appointment with her in some place in Karaj. She was attending the funeral procession of Homa Soltani when she received her husband’s call.  When she arrived at the meeting place, security forces arrested both she and her husband and took them to an unknown location.

Their friends and relatives have persistently inquired about their situation and whereabouts, but there is no information available on their fate.

Zahra Modarres-Zadeh had perviously been arrested on November 21, 2015, and on February 7, 2018, along with other civil activists in gatherings outside Evin Prison. She had been sentenced to 91 days of imprisonment and 74 lashes.