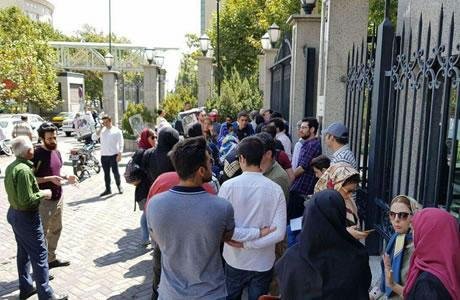 Iranian women actively participated in the protest rallies in Ahvaz, Karun and Tehran on August, 12 and 13, 2018.

At the same time, a group of preschool teachers in the city of Karun in Khuzestan Province staged a protest. They gathered in front of the Education Department from 10 a.m. (local time) and called for the accountability of Iranian authorities.

The protesters in the gathering said, “More than 90 preschool educators have been assigned to a contractor. The employer has not paid our insurance premiums in recent months. We want our insurance status to be determined.”

On August 12, 2018, a group of families of detainees gathered in front of the Shaiban Prison in Ahvaz and demanded clarification of the detainees’ conditions. Iranian women had a significant presence in both protests.

In addition, a group of students gathered in Tehran in front of the Central Bank in Mirdamad Avenue to protest the elimination of student exchange. Women actively participated in this protest rally, too. Many of the students have to return home due to the elimination of this quota and the inability to provide free exchange.