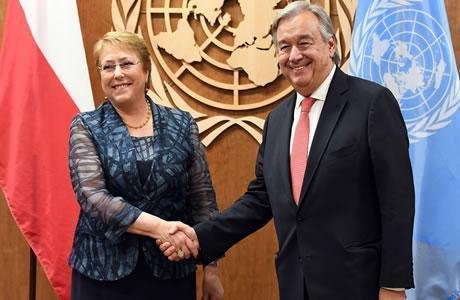 Michelle Bachelet was approved on Friday, August 10, 2018, by the UN General Assembly as the High Commissioner for Human Rights.

Bachelet was appointed in 2010 as the first director of UN Women, the UN agency promoting gender equality worldwide.

Michelle Bachelet, a trained pediatrician, was Chile’s first woman president, and served in that office from 2006 to 2010, and again from 2014 to March of this year.

Born in Santiago, Michelle Bachelet, 66, is the daughter of a general who opposed Pinochet’s overthrow of Salvador Allende.

She and her mother were detained and interrogated for several weeks and tortured during the dictatorship of Augusto Pinochet in the 1970s. After her release from detention, she went into exile in Australia and East Germany where she continued her studies in medicine.

Bachelet returned to Chile in 1979, but was prevented from working as a doctor for political reasons. She continued studying, specializing in pediatrics and public health.

After democracy was restored in 1990, she worked for the health ministry and in 2000 was appointed health minister, followed by defense minister four years later.

Bachelet will take up her new position on September 1. She will be the seventh high commissioner for human rights since the office was created in 1993.