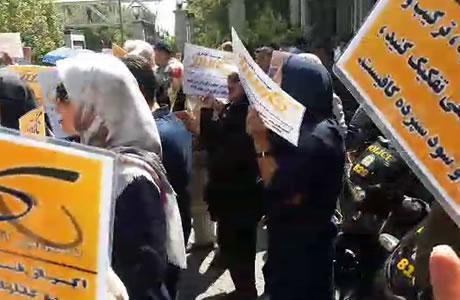 Women played prominent roles in recent protests in the cities of Tehran and Rasht.

On August 14, 2018, women joined the protest rally of plundered investors of Caspian Credit and Alborz Iranian institutes in front of the Central Bank in Tehran, Iran. The protesting crowd slammed the regime’s hollow promises and demanded their money back after two years of protests. They accused the officials of lying and turning a blind eye on their empty baskets.

Women played prominent roles also in the protest by employees of the Edalat Stocks company held outside the Ministry of Economic Affairs and Finance in Tehran.

On the same day, looted women of the Caspian Credit Institute in Rasht, capital city of Gilan Province, held a protest rally and chanted slogans, demanding the return of their deposits. These vigorous women have tirelessly staged numerous protests against the defrauding of the Caspian Credit Institute in Rasht. They have repeatedly expressed their disgust over the fraud and corruption pervading the country as credit and financial institutes operate with licenses endorsed by the government.

On August 13, 2018, the plundered customers of the Shideh Aviation Residential Project gathered in a protest rally outside the office of the Judiciary’s first deputy in Tehran, demanding the Iranian authorities to return their properties and assets.

Women played prominent roles in all of the above protest rallies.

In another protest movement on Monday evening, August 13, 2018, the crowd participating at a concert in Milad Hall of Tehran’s International Exhibition, chanted slogans of, “Death to dictator” and initiated an anti-government protest while departing the hall. Women played prominent roles in this protest as was reflected by the slogans that were mainly heard by female voices and echoed throughout the hall.

Iranian women played prominent roles in at least 320 demonstrations and protests from March to July 2018. This represents an almost double-fold increase in the average number of protests per month compared to last year’s 426 protests registered from March 2017 to March 2018, where Iranian women actively participated.