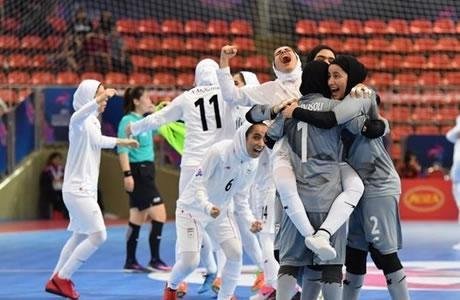 No sponsors support Iran’s female futsal team that won the Asian Championships cup. Iranian female athletes are unanimous that this is one of the main problems they face.

Shahnaz Yari, the head coach of the female Sepidrood futsal team in Tehran, explains how the ban on the broadcast of women’s games affects them. She said, “Sponsors want to be seen. Otherwise, they would not fund (any team), and this is one of the most basic problems that have made things difficult for women’s futsal teams.”

The lack of funds then leads to cancellation of games and participation of teams. Yari goes on, “The irregularities that occurred at the start of the league were mostly due to the teams. The matches would have started on July 27, if there were 14 teams in the league, but the number of teams first reduced to 12, and yesterday they said it might even be reduced to 11. Such incidents are caused by the existence or lack of sponsors who finance the teams.” (The state-run ISNA news agency – August 8, 2018)

In another example, the head coach of the Sherkat Melli Haffari Futsal Club, Zivar Babaii, talked about the effects of the country’s bankrupt economy on the Premier League teams and said, “Economic problems affect all teams, and this year, too, we are grappling with these problems. Lack of sponsors and financial backing prevented many teams from competing in this year’s league. As a result, the start of the league had to be postponed. The economic situation of the society affects our country’s sports as well. If we continue in this manner, the teams will also face difficulties. Because they are granted a certain amount of credit, but when there is a steady increase in the rate of (foreign) currency every day, the credit would no longer suffice (for the team’s expenses)?”

No professional life for female athletes

Babaii also questioned the notion of professional league in Iran and said, “They call it the professional league, but nothing is professional. You can see this unprofessionalism in a wide range of issues including the stadiums where the games are held and the contracts. When we say professional, it means that this is my profession and this is how I earn my salary, but this is not what happens in Iran.” (The state-run ISNA news agency – August 12, 2018)

Neda Shahsavari, an Iranian Ping Pong player, also raised the issue of livelihood of female athletes. She said, “In the present circumstances, no attention is being paid to the athletes in any of the provinces. Considering that athletes spend most of their time in national team camps, they end up having difficulties in their jobs. It is, therefore, necessary for the Ministry of Sports and Youth to find a solution. Unfortunately, we see that the people who are put in charge of sports, particularly in the Ministry of Education, do not have any specialty in any of the sports fields.” (The state-run ISNA news agency – August 12, 2018)

Iran’s female athletes do not enjoy any form of government backing. The restrictions imposed on them by the regime –for example, the official ban on airing of women’s sports matches from the state TV– further aggravate the situation for them as they cannot solicit funds from private sponsors, either. This situation has grave consequences for them. Sometimes, the teams are dissolved all together, due to lack of sponsors. At other times, the teams do not have the funds to travel to another city to take part in the tournaments.

Professional female athletes do not receive salaries and gold medal winners are abandoned to earn their living by peddling in the streets, selling pickles, and farming. Instead, the regime spends huge sums of money on enforcing the compulsory veil and depriving women of their social and economic rights.

Of course, the young women and girls of Iran have best responded to the ruling regime by actively participating in anti-regime protests all across the country and demanding regime change because this is the only way the rights and freedoms of Iranian women and men could be restored.