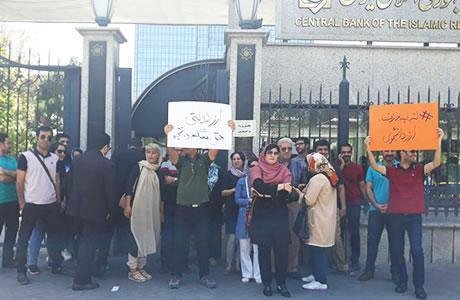 Iranian women’s protest rallies were simultaneously held on August 15, 2018, by the cheated clients of the fraudulent Caspian Credit Institute in Mashhad and Rasht.

In Mashhad, capital of the northeastern Razavi Khorasan Province, men and women converged upon a previous call in front of the institute’s Pamchal Branch to protest against the state-backed Caspian Credit Institute’s plundering of their invested assets.

The protesters chanted against the regime’s leaders, calling Iran “a safe haven for thieves” under the rule of Ali Khamenei, the mullahs’ supreme leader.

In Rasht, capital of the northern province of Gilan, protesters consisted mainly of women looted by the IRGC-backed Caspian Credit Institute, held a rally on Wednesday, August 15, 2018. They chanted, “The Caspian Sea has been sold out to the Russians.”

These determined women have been gathering regularly since a year ago outside the Caspian Credit Institute branches in Rasht, demanding answers from the authorities and reimbursement of their deposits and investments.

In Tehran, the third day of sit-ins by employees of the Edalat Stock Company was held on August 15. Women have been significantly participating in these sit-ins and protests.

At the same time, a group of male and female university students protested by gathering outside the Central Bank in Tehran against the removal of student exchange. They held up handwritten manuscripts and posters that read, “Student exchange is our indisputable right.”

Iranian women’s protest rallies amount to at least 320 from March to July 2018. This represents an almost double-fold increase in the average number of protests per month compared to last year’s 426 protests registered from March 2017 to March 2018, where Iranian women actively participated.