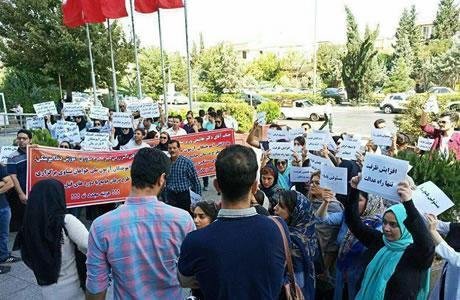 Women played an active role in the protests held by various sectors of Iranian society in recent days.

Also on Sunday, August 19, 2018, women participated in protests that were held in different parts of Tehran. Iran’s Medical Sciences student applicants for the Masters degree, including many female students, gathered in front of the Health Ministry building, urging an increase in the number of admissions. The capacity of student registration in all medical-related fields has reportedly decreased by 50%. This is what has caused protests by student applicants of Master’s degree in Medical Sciences.

On the same day, women played an active role in the protest by representatives of teachers in the education services against discrimination. The protest was held across from the parliament in Tehran.

Iran’s teachers held protests on May 10, in at least 32 cities across the country outside the Departments of Education and in Tehran, outside the Budget and Planning Organization and the mullahs’ parliament.

On Saturday, August 18, 2018, a large crowd of protesters objected to the disgraceful Caspian Sea sellout in front of the Iranian Parliament building. The protesters chanted loudly, “We will fight, we will die, we will take back the Caspian Sea.” Women played an active role in protesting against the treacherous agreement selling out the Caspian Sea.