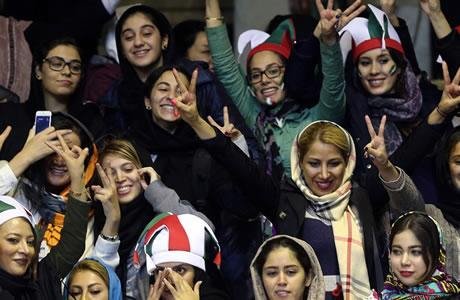 Ban on women’s entrance to sports stadiums remains in force

Ban on women’s entrance to sports stadiums in Iran continues to remain in force. Nasser Makarem Shirazi underscored his fatwa banning the presence of women in Iran’s stadiums.

In response to a question about the ban on women’s entrance to sports stadiums, Makarem Shirazi replied, “The environment in the stadiums is not suitable for the presence of women, and there is no doubt that the mixing of youth and their freedom is a source of many moral and social problems. Additionally, in some sports, men do not have appropriate attires in front of women. Therefore, women need to refrain from attending such programs. Especially since they can watch them from the media and their presence is unnecessary.” (The state-run ISNA news agency – August 19, 2018)

Only two months ago, Rahmani Fazli, member of the mullahs’ parliament (Majlis), announced that the Ministry of Sports is opposed to women’s presence in sports stadiums. In response to a question on ban on women’s entrance to sports stadiums, Fazli said, “The Ministry of Sports has announced in writing that ‘we cannot accept the responsibility of women’s security alongside men in stadiums.” (The official IRNA news agency – June 21, 2018)

An official of the Volleyball Federation also talked to IRNA news agency on June 17, 2018, on condition of anonymity on the ban on women’s entrance to sports stadiums. He said, “The conditions for the entry of women spectators is similar to last year and nothing has changed.”

Last year, too, Mehdi Taj, president of the Iranian Football Federation, said this on women’s presence in sports stadiums, “As I have already said, our stadium structure is not suitable for women’s presence. In addition, this issue is not a priority for women and society at the moment.” (The state-run Mehr News Agency – September 19, 2017)

Isfahan’s community of physicians received no salaries for two years