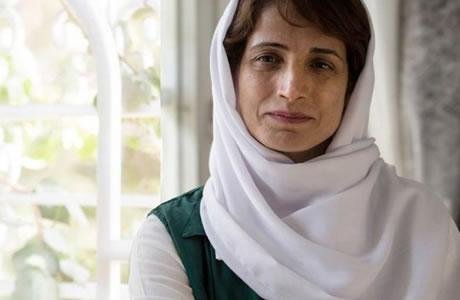 Nasrin Sotoudeh’s open letter, which was sent out of Evin prison in August 2018, has informed the public about the reasons for the human rights lawyer’s refusal to attend her court trial.

In an open letter, Nasrin Sotoudeh stated that she had been arrested and illegally summoned to the Prosecutor’s Office in Evin Prison and informed of a new charge “for the implementation of a sentence issued in absentia by Branch 28 of the Revolutionary Court.” From the moment she learned of her new charge, Nasrin Sotoudeh, “refused to provide any defense as an act of protest against the note to Article 48 of the Criminal Procedure Code.”

Nasrin Sotoudeh’s open letter explained the reasons for her refusal to appear before the court and present her defense.

Nasrin Sotoudeh added, “The Prosecutor’s Office illegally cites a list, that is clearly contrary to Article 35 of the Constitution, to prevent the accused from exercising the right to choose a lawyer.”

Upon arrival at the Prosecutor’s Office in Evin Prison, Ms. Sotoudeh gave names of three of her colleagues to be appointed as her lawyer, but to this date the relevant investigator has refused to accept her request.

At the end of Nasrin Sotoudeh’s open letter, she wrote, “In light of the above, and since I do not intend to account for a verdict that has already been issued by accepting the lawyers approved by the Intelligence Agency of the Judiciary, I refuse to attend the court and defend in front of the prosecuter and relevant investigator.”

Suicide among women on the rise in Iran