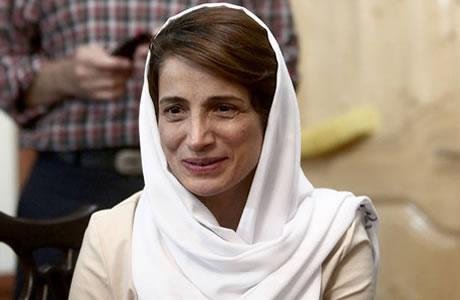 In the beginning of her letter, Ms. Sotoudeh noted the Intelligence Ministry agents’ attack on her residence and wrote, “Following my arrest two months ago, the Intelligence Ministry agents undertook an illegal measure by arresting the intellectual citizen, Dr. Farhad Maysami, and by ransacking my residence as well as the residences of my relatives and friends to discover badges that read, ‘I oppose the compulsory veil.’”

She added, “When the agents failed to find anything after searching the house of my sister-in-law, they took away their satellite receiver at the last moment.”

Nasrin Sotoudeh began a hunger strike in protest to the prison authorities’ failure to meet her demands. She noted this in her letter, “Since my correspondences with the authorities have proven to be fruitless, I have been compelled to go on a hunger strike beginning on August 25, 2018, in protest to my own arrest and numerous judicial pressures on my family, relatives and friends.”

Last week, Nasrin Sotoudeh’s house was attacked by agents of the Ministry of Intelligence. When Ms. Sotoudeh’s children were asleep, intelligence forces entered the house. They inspected the entire house and the storage. The agents were looking for a badge that says, “I oppose the compulsory veil.”

Following the actions of the Ministry of Intelligence agents, Ms. Sotoudeh issued an open letter on August 22, 2018, and expressed her objection. Nasrin Sotoudeh’s open letter explained the reasons for her refusal to appear before the court and present her defense.