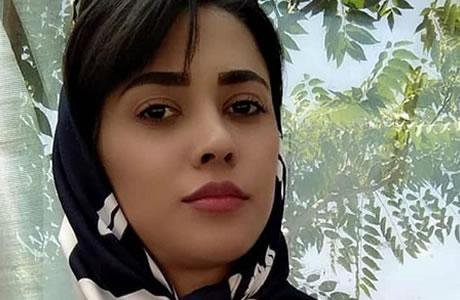 Tabriz University student Roya Saghiri was transferred to Tabriz Prison on August 25, 2018, to implement her 23-month prison sentence. She published the news of her conviction and imprisonment in Tabriz Prison on her Instagram page.

Tabriz University student Roya Saghiri was tried and sentenced to 23 months of imprisonment by the 2nd Branch of the Revolutionary Court of Tabriz in July 2018 and the verdict was upheld by the Appeals Court.

Tabriz University student Roya Saghiri, 24, along with seven other participants in the December 2017 protests, was arrested at Sa’at Square of Tabriz on December 31, 2017, and detained in the Women’s Ward of the Central Prison of Tabriz, capital of the northwestern Iranian Province of East Azerbaijan.

She was charged with “propaganda against the system” and “insulting the leadership.” Ms. Saghiri is also accused of “appearing in public without the religious Hijab (veil) by removing her scarf on the street.”

During the nationwide uprisings in Iran last December and January, at least 50 protesters were killed and at least 8,000 people were arrested. According to the data compiled by the Women’s Committee of the National Council of Resistance of Iran, at least 500 women were arrested during or after the protests and uprisings in December 2017 and January 2018. Recently however, Rassoul Sanaii Rad, political deputy for the IRGC, confessed that, “28 percent of the arrests in the protests were women.” (The state-run Mehr News Agency – August 15, 2018)

Women who dare to defy the dictated rules of the mullahs, defending human rights, campaigning against the death penalty and opposing the regime’s repressive restrictions are arrested and detained for “acting against national security”, “waging war on God”, and “insulting the sanctities” and have to face harsh consequences.