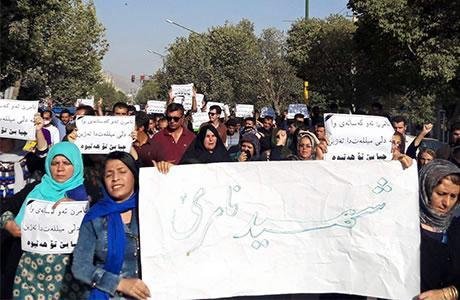 The massive presence of Kurdish women was significant in the demonstration and funeral of the martyrs of Marivan, Iran, on August 25 and 26, 2018.

Since Saturday, August 25, 2018, the people of Marivan began a protest against the forest fire caused by the explosion of undetonated projectiles and bombardment of the IRGC artillery. Kurdish women had a significant presence in the protest.

On Sunday morning, August 26, 2018, the bodies of Sharif Bajour and Omid Kohneh-Poushi were taken from the hospital to the mosque by a large number of people from Marivan and other cities. A large number of people, including Kurdish women from villages around Marivan and Sanandaj, and other cities, gathered in Marivan. The massive presence of Kurdish women at the funeral of environmental activists on Sunday morning was significant. The people of Marivan turned the funeral into an anti-government protest and chanted, “Martyrs do not die.”

The mass crowd who came from various cities to Marivan chanted, “The street is in an uproar, the blood of our hearts has been shed, the convenience of the oppressors, the exploitation of the poor.”

The Internet of Marivan is said to have been cut off by government officials since August 25.

Bombings and the explosion of an undetonated projectile resulted by the IRGC resulted in a fire in Marivan forests. Subsequently, the people tried to tackle the wildfire. While battling the fire, four Iranian Kurdish environmentalists lost their lives. Mohammad Pajouhi and Rahmat Hakiminia, two members of the Natural Resources Force of Marivan, and Sharif Bajour and Omid Kohneh-Poushi (Hossein-Zadeh), environmentalists, died on Saturday, August 25, 2018, while trying to extinguish the fire in the dense woodlands of Marivan, Iranian Kurdistan.