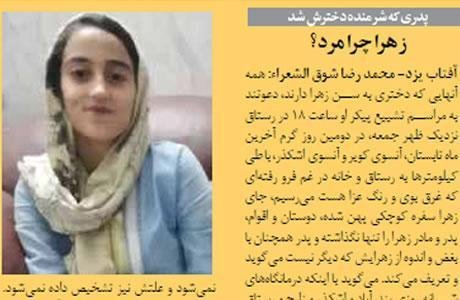 A 14-year-old girl died in the Afsharieh Hospital in Yazd, central Iran, due to the injection of a wrong medicine on Saturday, August 25, 2018. This outraged her family and other fellow citizens in Yazd.

A 14-year-old girl in Yazd by the name of Zahra had referred to the hospital for a simple stomach pain, but lost her life at the hospital emergency department because they gave her the wrong injection.

The death of the 14-year-old girl in Yazd provoked a massive protest by her family members, along with a number of residents of Yazd, who gathered in front of the Afsharieh Hospital. They showed their protest to the inadequacy and mismanagement of Iranian government officials by holding a large banner on which the young 14-year-old girl was portrayed.

In 2016, A young woman died in a hospital in Tehran after giving birth to her first child as a result of lack of attention by her doctor and hospital staff. Ziba Maghsoudi, 31, four days after delivering her son, was not in a natural condition and had shivers, fever and contracted seizures. Nevertheless, after two days, the hospital released her after receiving her doctor’s OK on the phone, without deciding what her illness was. At home, Mrs. Maghsoudi’s condition deteriorated, so her husband took her to the emergency room of another hospital where they took a blood test and realized that she was in a dangerous state but it was too late.

Mrs. Maghsoudi died with her head swollen twice as big as normal and her body bruised all over. Shockingly, her doctor who delivered her child, had not gone to visit her even once after delivery until she died. (State-run T-News, February 18, 2016)

Parisa Rafii, female student and activist, was sentenced to 7 years in prison