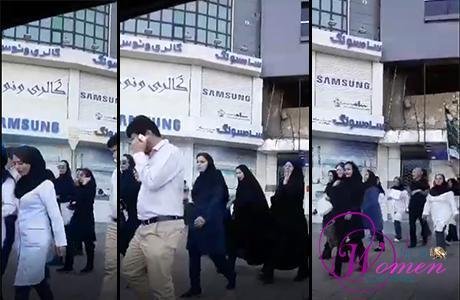 Iranian women continued their protests in Tehran and Karaj in recent days. Iranian women plundered by fraudulent financial institutes, nurses and hospital staff, as well as retirees have been among the participants in various protests on August 26, 2018.

Iranian women participated in the protest gatherings of swindled victims of the Alborz Financial Development Institute and the Shideh Airlines in Tehran.

The protesting women who gathered against the Alborz financial Institute chanted slogans, demanding reimbursement of their plundered deposits.

At the same time, Iranian women joined the protesters who gathered outside the Prosecutor’s Office in Tehran, against the lack of accountability of the Shideh Airlines in connection with the theft of their assets.

Iranian women have also continued to participate in the protests held by physicians and doctors. The personnel of Khomeini Hospital in Karaj staged gatherings for two consecutive days against the authorities’ failure to pay their past due salaries. The protest gatherings were held on August 26 and 27, 2018, at the hospital in Karaj.

The hospital staff of Khomeini hospital, in Karaj, including a large number of Iranian women, have been protesting for a long time to receive their non-paid salaries. They held a two-day sit-in protest in front of the Emergency Room on July 23 and 24, 2018, to protest officials’ failure to pay their salaries. Also on May 22, 2018, the female staff of Khomeini Hospital in Karaj gathered for the fifth time to protest their non-paid wages of six months.

In other related news, on August 27, 2018, retirees gathered in a protest in front of the mullahs’ Presidential Office in Tehran and demanded that their situation be handled and their pensions be paid by government officials.

Iranian women participated in at least 320 protests from March to July 2018. The average number of women’s monthly participation in protests this year has doubled compared to last year.