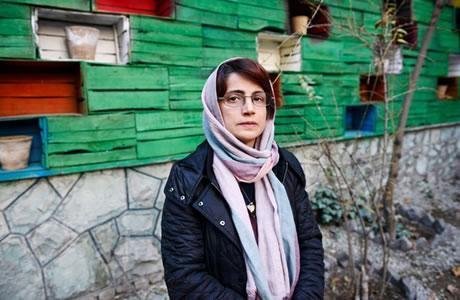 On August 27, 2018, her husband, Reza Khandan announced that in addition to five previous charges, the authorities have now opened three new cases against Nasrin Sotoudeh.

“In my meeting with Nasrin in prison today (August 26), she gave me the news that because she had refused to appear at a hearing, the assistant prosecutor in the case, and two other judicial authorities spoke to her in the Women’s Ward in Evin Prison and informed her of the three new charges,” he said.

According to Reza Khandan, after refusing to appear at the Prosecutor’s Inquiry, the Prosecutor, along with the Prison Supervisor and the Head of the Office of Implementation of Sentences in Evin Prison, went to the Women’s Ward to complete her case.

The interrogator referred to three new charges against Ms. Sotoudeh: “urging a referendum”, “assisting the formation of home churches” and “organizing protest rallies.”

Mr. Khandan expressed his surprise at the three new charges against Nasrin Sotoudeh and said he did not know where the charge of “assisting the formation of home churches” came from.

Ms. Sotoudeh, a lawyer and human rights activist, went on hunger strike on August 25, 2018, in protest to the authorities’ lack of response to her correspondences.

This is the fourth time the human rights lawyer Nasrin Sotoudeh is on hunger strike while in detention.

She has declared that the main reason for her hunger strike this time is to protest against the harassment and pressures by the judiciary against her family and friends.

“Given that my correspondences with the authorities have not born any results, I have been compelled to go on a hunger strike beginning on August 25, 2018, in protest to my own arrest and numerous judicial pressures on my family, relatives and friends,” she wrote in a note posted by Mr. Khandan on Facebook.