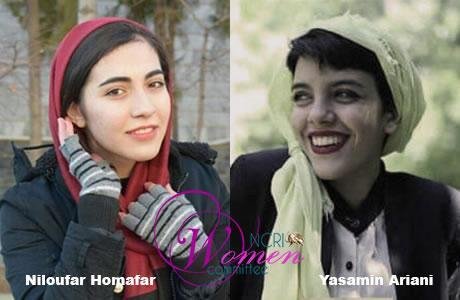 Two young women who were arrested during the protests in Tehran on August 2, 2018, have been imprisoned since in the Qarchak Prison of Varamin in undecided status.

Niloufar Homafar, 20, and Yasaman Aryani, 23, were arrested on Vali-e Asr Avenue in downtown Tehran as they were out in the street to demand their basic human rights in step with a new wave of protests that was sweeping cities across the country.

Yasaman Aryani was reportedly helping an elderly woman who had been thrown to the ground when hit by security forces.

The young women boldly posted a message via a mobile phone from inside a State Security Force van as they were being transferred to jail.

An IRGC general admitted earlier this month that 28 per cent of those arrested in the anti-regime protests were young women and girls.

The regime’s officials and media have also admitted that many leaders of street protests have been young women.

The state-run Fars news agency reported on August 5, 2018, “Two young women had undertaken the role of leaders of the protests at Vali-e Asr intersection [in downtown Tehran]. The team of two were standing on the sidewalk of Vali-e Asr Avenue and shouting at people, ‘People, why are you silent?’ Gradually 10 to 15 people gathered around them and they started chanting, ‘death to the dictator.’”

In another part, the report says, “Some distance away, in the riots of Karaj, 20 leaders were identified and arrested, the majority of whom were women. A few days earlier, a video clip was being circulated in the social media showing a girl standing on a height and lecturing people in a bid to incite them [to protest.]”

In a separate report on the same day, Fars wrote, “It is noteworthy that today, too, similar to the previous days, the leader of these people [the protesters] was a woman.”