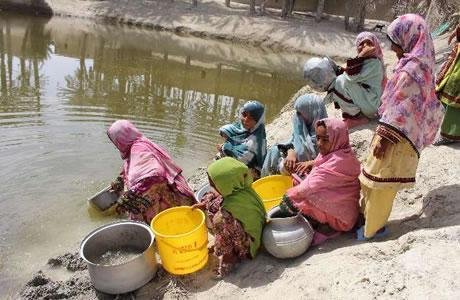 Three girls and a woman drowned in a waterhole in the village of Zirdan, central Nik Shahr, located in south of Sistan and Baluchestan Province, Iran. This was announced by the Director of Medical Accidents and Emergencies Center in Iranshahr.

Naseh, head of the pre-hospital emergency ward and accident management at the School of Medical Sciences of Iranshahr, told news agencies that the incident happened in Zirdan village on Tuesday, August 28, 2018. The four victims included three girls, 8, 11 and 14 years old, and a 25-year-old woman who had gone to bring water, but the 8-year-old girl slipped as she was trying to drink water. The three others jumped into water, one after the other, to save the little girl, but drowned in the mud pits of the waterhole.

“Two ambulances were immediately dispatched to the area, but unfortunately, three girls had died before the ambulance arrived, and one died after a failed attempt of CPR and was transferred to Mohammad Rasool-Allah Hospital in Nik Shahr,” Naseh added. (The official IRNA news agency – August 28, 2018)

In a country, rich in natural resources, many Iranian villagers do not have access to water even brought by tankers or drawn from wells.

The Sistan and Baluchestan Province today is the most underdeveloped, desolate, and poorest of Iran’s provinces and suffers from a ten-year drought. So far, the Iranian government has not provided the necessary facilities to deal with the drought in this province and local people often go to the few water sources to obtain their water.

One of the greatest infrastructural problems of rural women and girls is their lack of access to clean and adequate water. These villages do not have pipelines. Their water is provided by worn out tankers that bring them unsanitary and unclean water with long delays and in small amounts.

Due to severe shortage of water, people have dug out ditches to collect rain water and this is considered as the village’s water reservoir. The ditches, called Hootag, attract flies and mosquitoes. This water is used for bathing, laundry and doing the dishes at the same time. Sometimes, when the Hootag water is fresh or the water tanker has delays, people also drink the same water.

Collecting water is mostly done by women and girls, and girls as young as 10 and 11 are responsible for carrying water from the Hootag to their homes. With the lack of adequate water sources and facilities in these villages, the situation and conditions in which women and girls face are dangerous and risky.

Women engaging in protests in Iran