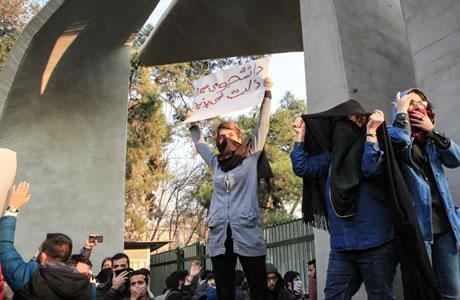 At least 15 women have been among jailed protesters, according to a news release by Human Rights Watch on August 31, 2018. The NGO called for the freedom of jailed protesters including 15 women in Iran prisons.

“On July 31, a new wave of protests against the deteriorating economic conditions and perceptions of government corruption began in the city of Esfahan and quickly spread to other cities, including Karaj in Alborz province and Tehran, the capital.”

On August 11, 2018, Mehdi Mahmoudian, an Iranian journalist, tweeted that authorities had detained 15 women they had arrested during the August protests in Qarchak prison in Tehran, HRW said.

He mentioned the names of the arrested women and said, “Almost 10 days after the protests in Tehran, dozens of people, including 15 women are still being held in prison.

“Most of the detained women are middle aged or older. Ms. Fatemeh Dizaji is one of them, who has been temporarily released from Qarchak Prison due to the death of her child.

“Elaheh Bahmani, Khadijeh Kiani-zadeh and Hadiseh Sabouri are other detainees who have been taken away from their children for almost 10 days and are in an uncertain condition.

“Sara Malek-Shirazi and Mojhdeh Rajabi are other detainees in Qarchak Prison who were only passing by the locations of the protests and did not have direct connections to the unrests. They were arrested and taken to Evin Prison and then transferred to Qarchak Prison,” he concluded.