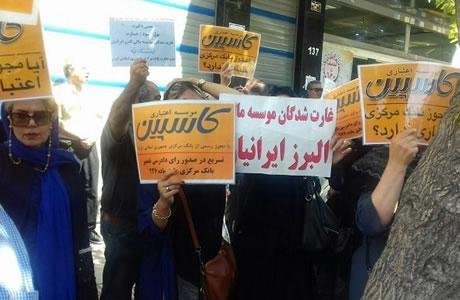 Women engaging in protests in Iran

In recent days, various sectors of society in Iran have witnessed scenes of women engaging in their protests.

On Tuesday, August 28, 2018, a large number of women defrauded by the Caspian financial institute held a protest in front of Tehran’s Banking and Monetary Court. The women engaging in the protest had gathered according to a previous call and chanted: “Caspian stole our money and the regime supported them.”

At the same time, women plundered by the IRGC-backed Caspian Credit Institute in Rasht protested at the Caspian Institute Branch. Two of the women inside the Institute expressed their rage and objection against the Iranian authorities and the lies that the state-run television and media are broadcasting.

One of the women revealed the lies and said, “Why doesn’t the National Television come to hear what we have to say? Instead of showing all these corrupt shows, instead of showing all those lies on television, why don’t they come to see what we have to say? They are showing what they are building in Gilan, what lies! They are making a mockery of our people, instead to doing this, they should come here and be our voice for once. If they are honest, why don’t they come to see why we are protesting?”

Simultaneously, a group of men and women buyers of the Kimia Khordo Automobile Company gathered in front of Tehran’s Banking and Monetary Court on August 28, 2018, to protest against the lack of delivery of their cars after several months from the deposit requested by the company.

In another event, students from Tehran University held a gathering in protest against the tuition for Compensation Courses in front of University. Many female students showed up in the protest and called out on the defalcation by the University authorities and chanted, “This tuition in forced, and we will not give forced money to the university.”