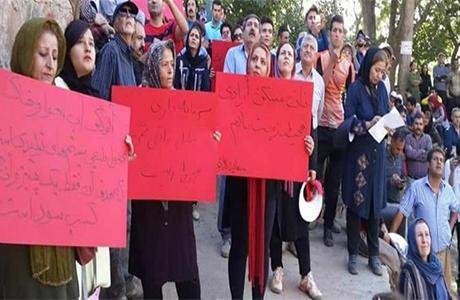 Women participated in more protests in Iran in recent days, along with crowds of demonstrators filling the streets of Sanandaj, Karaj and Zabol.

In Sanandaj, people protested on August 31, 2018, against the IRGC’s shooting and killing of Iranian porters. Women participated in this protest in significant numbers.

A large group of women headed towards the Koodak (Child) Park in Sanandaj while calling for an end to the attacks against poverty-stricken porters who try to make living by carrying heavy loads on their shoulders across the border. During their protest, they also held a tribute to the memory of the environmentalists who were killed during a forest fire in Marivan caused by the explosion of undetonated projectiles and bombardment of the IRGC artillery.

In Karaj, women participated in protest of medical personnel of Khomeini Hospital as they staged a protest gathering in front of the Karaj Municipality for the third time this week on August 29, 2018, against the authorities’ failure to pay 10 months of their salaries. Women personnel have played a significant role in these protests. Previous protest gatherings were also held on August 26 and 27, 2018, at the hospital in Karaj.

The hospital staff of Khomeini hospital, in Karaj, including a large number of Iranian women participated in several protests to demand their non-paid salaries. They held a two-day sit-in protest in front of the Emergency Room on July 23 and 24, 2018, to protest officials’ failure to pay their salaries. Also on May 22, 2018, the female staff of Khomeini Hospital in Karaj gathered for the fifth time to protest their non-paid wages.

Also on August 29, 2018, the hospital staff of Amir Al-Momenin Hospital in Zabol, which consists of mostly women personnel staged a protest gathering against the delay in salary payments and the decrease in their wages. While the country is facing an economic crisis, the delay and decrease in the personnel’s wages only add to the problems of the female personnel and their families.