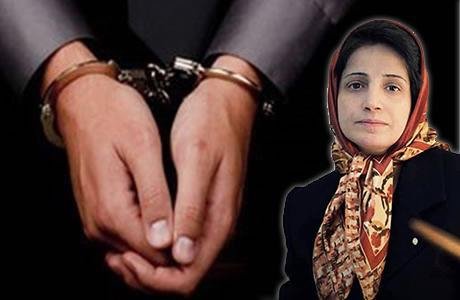 The Iranian regime continues its baseless arrests and imprisonment of human rights lawyers and activists. On the morning of September 1, 2018, Hoda Amid, a lawyer and a women’s rights activist, was arrested at home in Tehran by security forces.

The arrests of women activists and lawyer has taken place while increasing pressure in recent days on lawyers and activists in Iran has caused widespread protests on domestic and foreign levels.

Reza Khandan told the state-run ISNA news agency, “I think my wife’s third month of detention will end in 10 days.” He had previously said, “After the first month of her temporary detainment ended, with a 10-day delay, they extended my wife’s imprisonment again.” (The state-run ISNA News Agency – September 1, 2018)

Nasrin Sotoudeh, human rights lawyer and activist was recently informed of three new charges, in addition to five previous ones. She began a hunger strike in Evin Prison on August 25, 2018, in protest to her arrest and numerous instances of Judiciary’s pressures on her family, relatives and friends.