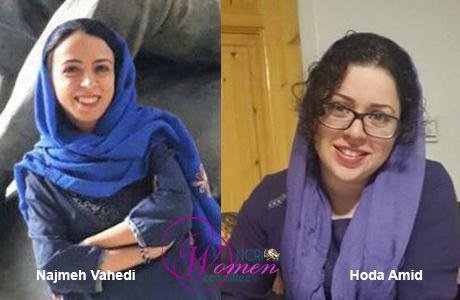 The statement reads in part, “Human rights lawyer and women’s rights activist Hoda Amid was arrested at her home on 1 September, just a day after the arrests of human rights lawyers Payam Derafshan and Farokh Forouzan. Payam Derafshan and Farokh Forouzan were arrested on 31 August while visiting the home of another recently jailed lawyer, Arash Keykhosravi, in the city of Karaj, north-west of Tehran.

“Also, on 1 September, women’s rights activist Najmeh Vahedi was arrested by the Intelligence Unit of the Revolutionary Guards at her home in Tehran.”

“The human rights situation in Iran has reached crisis point. Mild expressions of concern are not enough. We call on the international community to demand that the Iranian authorities stop attacks on human rights defenders, including human rights lawyers and women’s rights activists. It should urge the authorities to immediately and unconditionally release those most recently detained and ensure that every detainee is provided access to a lawyer of their own choosing from the time of arrest.

“Given its ongoing dialogue with Iran, the European Union (EU) should be at the forefront of such calls,” Luther stressed.

“Hoda Amid had previously written about a campaign, entitled ‘Struggle to change the masculine face of Majles [parliament]’, which was launched before parliamentary elections in February 2016, with the aim of increasing women’s representation in parliament. She and Najmeh Vahedi had also worked to empower women and girls, including by teaching them how to protect their rights in marriage.”