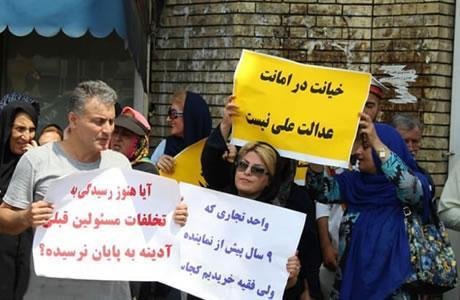 Significant presence of women in protests of various sectors in Iran

Women boldly displayed a significant presence in recent protests of various sectors in cities across Iran.

On September 4, 2018, Iranian women participated alongside men in a protest in Kahriz city of Kermanshah Province, against the extremely poor situation of the region and the lack of attention of the Iranian authorities to the development problems. Kahriz has been annexed to Kermanshah in recent years, and not only has it not benefited from urbanization but also has been deprived of the benefits of being a village.

Women had a significant presence in this protest and pointed out that the Iranian authorities’ neglect has caused a lot of problems for the residents.

On Saturday, September 1, 2018, defrauded victims of the Adineh Housing Residential Complex in Rasht gathered in protest against the lack of completion of construction of the complex units, which has lasted for nine years from the start of its construction. Women displayed a significant presence in this protest and chanted slogans against the Iranian authorities. They boldly directed their slogans to the mullahs’ Supreme leader and exclaimed that robbery and embezzlement is free in Iran.

On Saturday, September 1, 2018, a large group of residents in Zabol gathered in protest to the inadequacy, embezzlement and robbery of the mayor and several other authorities elected by the city council. With their significant presence, women showed a large participation in this gathering and covered the doors of the City Council building with mud.

In videos of the protest circulating on social media, the voices of women protesters could be heard as they called for the closure of the City Council in Zabol. They chanted, “If the council is dissolved, Zabol will turn into a garden,” and “we do not want an incompetent council.”

Women had significant presence in at least 390 protests from March to August 2018. This shows a double-fold increase in the average monthly participation of women in public protests against the Iranian regime compared to last year.