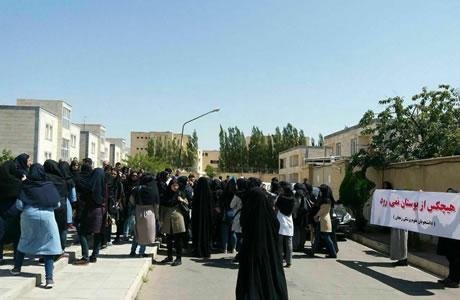 As various protests have taken place in the streets of Iran over the past week, the commitment of young women students has particularly been on display, where female students are protesting alongside men.

On September 5, 2018, young women students from Zanjan University of Medical Sciences protested against the transformation of their dormitories to offices which has led to the displacement of female students in alleyways and streets of the city.

Attended by a large number of young women students from different medical majors, the protesters demanded not to be relocated to a new campus. They believe that the place in question will lack the adequate facilities and will make the students’ access to their basic needs difficult.

One of the female students from Zanjan University of Medical Sciences said: “Most medical students have different shifts at hospitals, and if they are relocated to a new dorm, they will encounter safety and security problems during transportation.”

In another event, on September 1, 2018, a group of students gathered in front of the Central Bank in Tehran and protested against the cancellation of student exchanges and high costs for International English Language Testing System (IELTS) exams.

Young women students showed a radiant participation in this protest and one of them announced the demands and reasons for the protest gathering.

Under the Iranian regime, activism is seen as a threat to national security. However, throughout the week, young women students have hurled into the spotlight declaring that women have become the face of several protests.