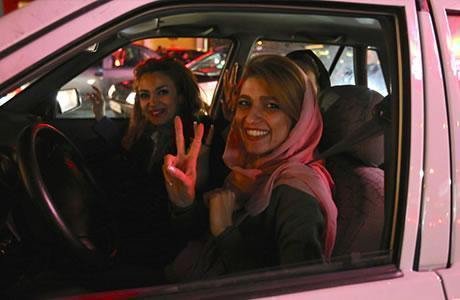 Iranian women to face further suppression in the upcoming month

Iranian women will face further suppression and harassment under the pretext of improper veiling for the upcoming month of Muharram, which is essentially a month of mourning for Muslim Shiites.

The State Security Force Commander Hossein Ashtari announced this in a meeting on September 4, 2018, stating that the SSF would deal seriously with women violators who do not observe their hijab in vehicles, further adding that if such violators have previous record of warnings, their cars would be impounded.

The SSF and a plethora of morality police are stepping up their operations to enforce harsher confrontations with Iranian women for mal-veiling in personal vehicles as they hound the roads in the days leading to Muharram.

Fearing the spread of popular protests against the regime and in a bid to contain them, the SSF Commander said, “We need to improve our readiness so that we can carry out our missions efficiently in the coming months.”

Ashtari reiterated that the SSF’s priorities have been endorsed by the mullahs’ supreme leader Ali Khamenei. (The state radio and television IRIB, September 4, 2018)

Just last July, the Office of Cultural Studies of the Research Center of Majlis, the mullahs’ parliament, published a report entitled, “Effective elements in the implementation of the policies on (women’s) Hijab (veiling) and the available solutions.”

The law on the compulsory veil in Iran was adopted by the mullahs’ parliament in 1983 and ratified punishments for Iranian women who do not observe the compulsory dress code in public places.

Previously, in a meeting on October 8, 2017, with the SSF Commander, mullah Jafar Sobhani, one of the clerical regime’s high ranking religious scholars, had admitted, “Despite all the various emphases in recent years, we have not been able to achieve our goals regarding mal-veiling.” (The state-run Fars news agency – October 8, 2017)

Admission of failure by the state-backed cleric is despite 29 state agencies and 301 cultural organizations having been tasked with promoting and enforcing compulsory veil on Iranian women for the past 40 years.

Two women among 35 protesters summoned for trial in West Azerbaijan