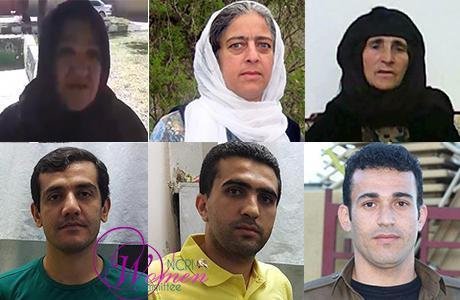 Pleas by mothers of Kurdish political prisoners and repeated calls by the Iranian public opinion and international human rights advocates and organizations fell on deaf ears, and the clerical regime hanged Ramin Hossein Panahi, 24, Zaniar Moradi,30, and Loghman Moradi, 32, in the morning of Saturday, September 8, 2018, in Rajai Shahr (a.k.a. Gohardasht) Prison in Karaj, Iran.

The three prisoners had been on dry hunger strike for several days before their execution.

Amjad Hossein Panahi confirmed his brother’s execution by the regime, while the Iranian state-run press published the news of the executions.

The families of the Kurdish political prisoners had repeatedly appealed to human rights organizations and advocates in Iran and abroad, to help prevent the executions.

Ramin’s mother, Sharifeh Zarrini (a.k.a. Dayeh Sahrifeh), wrote a letter on May 24, 2018, to Federica Mogherini, the EU Foreign Policy Chief, urging her intervention to stop the execution of her son.

Ms. Zarrini and her husband also threatened to burn themselves if the Intelligence Ministry did not release Ramin and halt his execution. They were arrested and imprisoned temporarily for making such threats.

In a video recording posted on news outlets, Zaniar Moradi’s mother pleaded, “They took Zaniar on Wednesday to the army prison. They said they would take them for some questioning but they were told that they will be hanged on Saturday. I beg you all to come to my help. The Islamic Republic didn’t get enough by hanging my husband and now it wants to stain its hands with the blood of my son.”

Loghman Moradi’s mother also asked people to come to her help and said, “The young men are innocent. They have committed no crime. We’re very sad. For the sake of God, please pardon them.”

In solidarity with the mothers of Kurdish political prisoners, Ms. Farangis Mazloum, mother of political prisoner Soheil Arabi also made a public plea, urging human rights activists and organizations to do everything in their power to save their lives.

Ramin Hossein Panahi, an Iranian Kurdish political activist, had been arrested on June 23, 2017, and imprisoned the Central Prison of Sanandaj. He was sentenced to death on January 15, 2018.

Cousins, Zaniar Moradi and Loghman Moradi, had been arrested in 2009 on charges of “enmity to God” and “corruption on Earth”, and were sentenced to death by public hanging in December 2010.

Despite the earnest pleas by mothers of the three Kurdish political prisoners and global outcry against the executions, the Iranian regime hanged them in a bid to step up the atmosphere of terror and repression to extinguish the growing public protests.

The Iranian opposition leader Maryam Rajavi described the executions as crimes against humanity and urged the UN Security Council to immediately intervene and address the atrocities.

Iranian women to face further suppression in the upcoming month