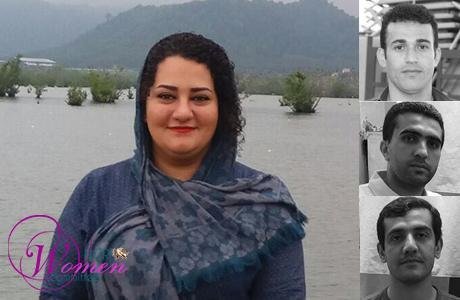 In her letter, political prisoner Atena Daemi mocked the clerical regime’s ‘justice’ and wrote, “They have killed our beloveds and yet proudly boast that they have executed justice, a justice whose symbol is not an angel holding balanced scales, but a turbaned man with a spot on the forehead from his turbah, blindfolded, but also extremely blind; in one hand he holds a rosary, and with the other, he holds an unequal scale by a hanging noose. One pan is lifted to the skies and the other is so heavy with corpses that it is buried deep underground. A justice that we have not seen or heard of for 40 years! Has killing three of our country’s young men reduced any pain of our people?”

Political prisoner Atena Daemi referred in her letter to the catastrophic economic situation, poverty and unemployment in Iran, commended the resistance of the three Kurdish political prisoners, and finally addressed the prison guards and authorities in another part of her letter:

“You must have burned deep down to your heart, when you couldn’t see them weak even for a single moment. Surely, you have envied them for being so steadfast and firm, giving their lives for their ideals without caving in. And how brazenly you looked on and watched the last throes of our loved ones.

Surely, you know that by such savageries, you make yourself more detested than ever. In fact, you kill yourself. Today, too, you did not kill Zaniar, Logham and Ramin but dug your own graves even deeper.

“For us, they are none but symbols of democracy. They spent nine years in prison alongside friends with all kinds of ideas and beliefs and they were popular among their inmates. You did not kill Zaniar, Loghman and Ramin, since they became dearer in our hearts and now they are being mourned by the world.”