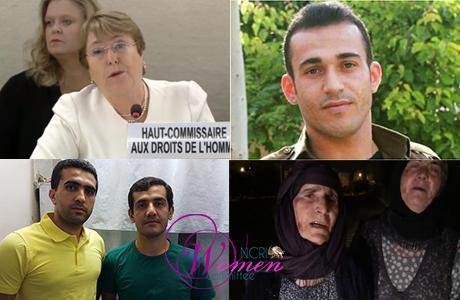 In her opening statement to the 39th Session of the Human Rights Council on Monday, September 10, 2018, at the UN Headquarters in Geneva, UN High Commissioner for Human Rights Michelle Bachelet addressed the situation of human rights in Iran, condemning the executions of three Kurdish political prisoners and calling for the release of all those imprisoned for exercising their right to freedom of speech and association.

Bachelet said, “Continued use of the death penalty for juvenile offenders is deeply troubling and should be prohibited in all circumstances, with the sentences of those currently on death row commuted. I deeply deplore the executions last week of three Iranian Kurdish prisoners despite the serious concerns raised by Special Procedures mandate holders that they were not afforded fair trials, and were subjected to torture. Recent arrests and ill-treatment of a number of human rights defenders and lawyers are deplorable. All those detained for peacefully exercising rights to freedom of expression and association should be released.”

Political prisoners in the Women’s Ward of Evin Prison also paid tribute to the three Kurdish political prisoners on Sunday in the visitations hall along with their families and sent out a message in which they said, “Their names have been registered in the list of Iran’s freedom lovers, and their resistance will teach lessons to those seeking freedom for Iran.”

In the meantime, Sharifeh Zarrini (Dayeh Sharifeh), the mother of political prisoner Ramin Hossein Panahi, and her daughter, were allowed to see the body of their executed son in Behesht-e Zahra Cemetery under tight security measures and in the presence of intelligence agents. However, she was not allowed to take the body with her to be buried in Kurdistan.

Dayeh Sharifeh said, “My son was executed innocently. He had not eaten for 20 days. They executed him with sewn lips and while hungry.”

Three Kurdish political prisoners –Ramin Hossein Panahi, 24, Zaniar Moradi,30, and Loghman Moradi, 32– were hanged in the morning of Saturday, September 8, 2018, in Rajai Shahr (a.k.a. Gohardasht) Prison in Karaj, Iran, despite domestic and international calls to stop their executions. The three prisoners had been on dry hunger strike for several days before their execution.

3-year-old girl dies after not being admitted to hospital