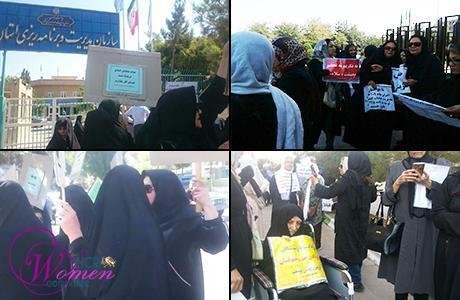 On Tuesday, September 11, 2018, various women sectors participated in the protests of retirees in Tehran, Mashhad and Yazd.

In Tehran, retirees of nursing, paramedics and health, as well as retirees of agriculture, banking and education, protested against the grim situation of their livelihood in front of the Planning and Budget Organization building. The protesters chanted, “The poverty line is 5 million (rials), our salary is 2 million (rials),” and “Our salary is in rials, the prices are in dollars.”

In Mashhad, the Civil Servants Pension Fund (C.S.P.F) retirees gathered in response to a previous call to protest against their poor livelihoods.

In Yazd, the Civil Servants Pension Fund (C.S.P.F) retirees and nursing pioneers gathered in protest in front of the city’s Management and Planning Organization. Retired teachers and educators also participated in this protest.

Also on Monday, September 10, 2018, various women sectors participated in protests in the cities of Mashhad and Sarpol-e Zahab.

A group of men and women plundered by the Caspian Credit Institute affiliated with the IRGC, held a protest rally in front of the Institute’s Pamchal branch in Mashhad.

In another protest movement, women participated alongside men in the earthquake-stricken village of Bi Bayan, in Sarpol-e Zahab, who gathered in front of the Governorate of Kermanshah to protest against the drought crisis in the village and the lack of accountability of government officials.

In August, widespread protests in various cities throughout Iran were held in protest to the devastating crisis of the lack of drinking water in Iran, with thousands of women taking part in the protests.

Various women sectors participated in at least 390 protest rallies between March and August. This represents an almost double-fold increase in the average number of protests per month compared to last year’s 426 protests from March 2017 to March 2018, where Iranian women actively participated.