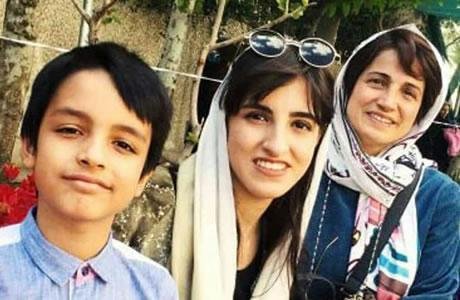 Nasrin Sotoudeh’s daughter was threatened to be deprived of visiting her mother if she did not observe the veil.

The threat was made on Sunday, September 16, 2018, when Nasrin Sotoudeh’s daughter, Mehraveh Khandan, and her brother had gone to Evin to visit their mother.

Instead of being called to visit her mother, Mehraveh Khandan was threatened by the director of the visiting hall to observe her hijab or she will not be allowed into the visiting hall. This was while her covering was the same as in the previous visitations.

“After waiting in the visitation hall for half an hour, (my mother’s) cellmates told me that when she was asked to sign a pledge to fully observe the hijab, she objected and then protested by refusing to go to visitation, saying that she won’t be making phone calls, either,” Mehraveh Khandan, Nasrin Sotoudeh’s daughter added.

Detained human rights lawyer Nasrin Sotoudeh has given up her family visitation right in protest against a prosecutor’s demand that she receives visitors fully draped in a veil. Ms. Sotoudeh also refused to sign a written pledge stating she would wear the head-to-toe veil, which only shows a woman’s face and hands.

Prison authorities have apparently decided to use the issue of mal-veiling as an excuse to pressure the two political prisoners.

Nasrin Sotoudeh’s husband, Reza Khandan, has also been detained since September 4, 2018, after being arrested by agents of Iran’s Intelligence Ministry.

Detained since June 3, 2018, Nasrin Sotoudeh has been on a wet hunger strike for three weeks in protest against the alleged national security charges she is facing and the security forces’ harassment of her family and friends. She announced that until the unconditional release of Reza Khandan from Evin prison, she will refuse to go to accept any IV fluids or her blood pressure taken at the prison’s medical clinic.

On September 9, her blood pressure was at 5 and the news indicating her going unconscious while walking on the stairs has caused concern among her family and friends.