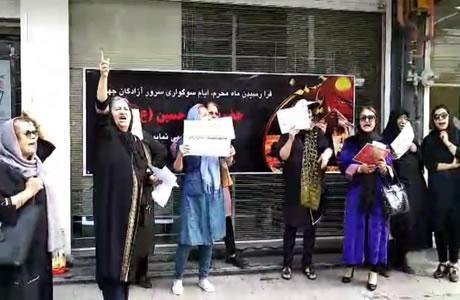 Plundered women gathered in the city of Rasht, northern Iran, on Monday, September 17, 2018, to protest against the Caspian Credit Institute’s defrauding of their assets and investments. The plundered women courageously chanted in presence of a mullah, saying: “Our money has disappeared; it’s been found under the mullahs’ cloak.”

These plundered women have been persistently gathering outside the Caspian Credit Institute branches in Rasht, capital of the northern province of Gilan, since a year ago, demanding answers from the authorities and reimbursement of their deposits and investments.

Also in Tehran, a large number of plundered women and men depositors of the Caspian Credit Institute gathered and held a protest rally in front of the Central Bank. During their protest, the large crowd blocked Mirdamad Blvd and chanted slogans against the swindler state-backed Caspian Credit institute.

Women have had significant presence in the protests of various sectors of the society. Iranian women’s protest rallies amount to at least 390 from March to August 2018. This represents an almost double-fold increase in the average number of protests per month compared to last year’s 426 protests registered from March 2017 to March 2018, where Iranian women actively participated.