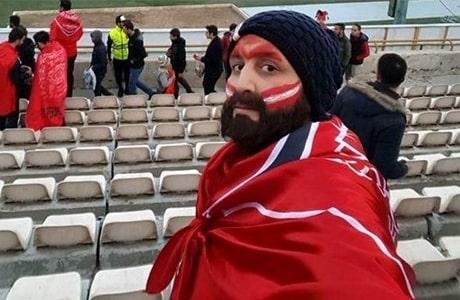 Ban on women’s entrance to sports stadiums was once again reiterated by officials on Monday, September 17, 2018, ahead of the Asian League game between Tehran’s Persepolis and Qatar’s Ad-Dahil.

Farhad Nikoo-khesal, the supervisor of the Azadi Stadium in Tehran said, “We have been taking the necessary measures since a month ago, so that all spectators would be closely examined before entering the Azadi Stadium.”

“While we are going to examine the spectators in terms of tickets, female security forces are also going to be stationed at the Azadi Stadium’s entrance gate to make sure women’s entrance to stadium by wearing men’s makeup would be prevented,” Nikoo-khesal added. (The state-run ISNA news agency – September 17, 2018)

Iranian women’s entrance to stadiums to watch football games is banned and those who try to do so are arrested. But Iran’s young women and girls have refused to abide by this rule, entering stadiums in various ways and making their photos public as an act of protest.

Women made headlines on March 1, 2018, as they attempted to enter Azadi Stadium to watch the game between Iran’s top teams. The State Security forces prevented entry of 35 women and held them in detention.

Some of the regime’s officials in charge of women’s affairs had previously promised that the government would pass a “directive” on women’s presence in sports stadiums. However, the Supreme Council of Cultural Revolution has removed the issue of women’s entrance to stadiums from its agenda, altogether and announced that women’s society faces numerous other problems that enjoy priority. (The state-run Fars news agency – December 9, 2017)

Female journalists and staff of ANA news agency fired all together