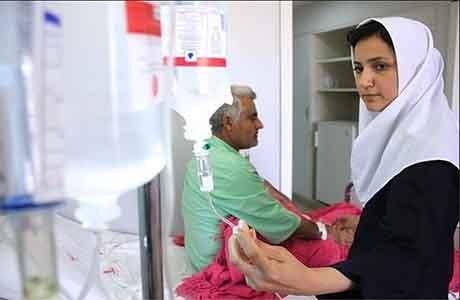 Golestan nurses working in various medical hospitals in this northern Iranian province have reported that they have not been paid their wage claims. They said, “We have up to a year of unpaid wage arrears,” and “we are tired of this discrimination.”

Golestan nurses said they have been repeatedly sending letters to provincial authorities asking for their wage payments, but have not yet received an answer. The nurses have said that they have not received their shift payments, wages and overtime payments, and have to wait months for their salaries.

Golestan nurses also criticized discriminatory rules in the clerical regime’s payment system, saying, “While the law on tariffs for nursing services is not being implemented in hospitals, physicians’ fees have increased after implementing the Health Promotion Plan, and they have huge incomes. But nurses, who endure the most stress in the medical care sector, have to wait for months to get their low wage payments.”

Such work pressure includes compulsory over-time work and ongoing discriminations against women in the medical system, while nurses are not being regularly paid their salaries and benefits.
Last June, more than 17,000 nurses wrote an open letter and called on officials to urgently address the situation of nurses. Golestan nurses stated that they would have no other choice but to go on strike if their demands were not answered.
Nurses have been calling for the implementation of the law on tariffs, eliminating discrimination in salary payments, reducing the wage gap between doctors and nurses, and eliminating human resources supply companies as contractors for nurses from the public and private medical centers.
Golestan nurses said, “We are tired of this discrimination and we hope that the authorities are thinking of a solution to improve the situation to some extent.”

According to official statistics, every 15 Iranian patients have only one nurse, while according to international standards every nurse has to attend to one or maximum of four patients. 17 nurses have died in Iran in 2016-2017. All victims are suspected of dying due to work-related stress.

Baha'i Iranians continue to be arrested and denied education