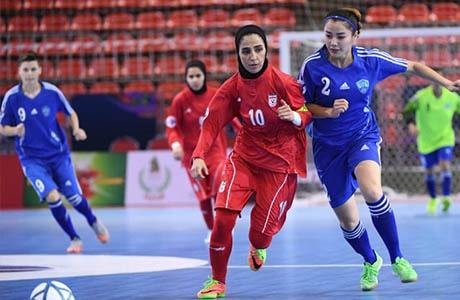 Bankrupt economic conditions in Iran have had its adverse impact on sports, too. Despite winning Asia’s championship, Iranian women’s national futsal team lacks funding or any form of financial support in Iran.

Iranian women’s national futsal team does not have any sponsors, and the women’s futsal league has been facing various problems since it began a few weeks ago.

It seemed that winning Asian championship would attract financial sponsors for the Iranian women’s national futsal team. Not only this did not happen, but the number of contracts have been fewer than last year’s. The managers as well as the private sector have not taken any steps to fund these women.

Tehran’s Azad University, one of the oldest in this field, has withdrawn from sponsoring women’s futsal. There have been new names in this field, but no special support.

The first week of women’s futsal league thus kicked off while a number of national team stars did not have any teams.

The players’ financial conditions are also bad. Their Asian championship has not affected their salaries in terms of giving them a raise.

Farzaneh Tavassoli, the goal keeper of the Iranian women’s national futsal team, had this to say regarding the amount of salaries and contracts of her team players, “Futsal players are fed up because the offers this year are lower than last year, while all prices have soared several folds. Instead of increasing their offers, the players are either playing on contracts similar to last year, or on lower pay contracts. Something that has been discouraging to them.” (The official IRNA news agency – September 22, 2018)

The economic crisis in Iran has not only affected futsal, but has had other consequences, as well. Maryam Monazzami, vice president of women’s wrestling federation, said the reason the national women’s Alish team did not participate in the international tournaments in Lebanon, was the irremediable economic problems. (The state-run ISNA news agency – September 21, 2018)

Women’s rights activists linger in jail, no news on their fate