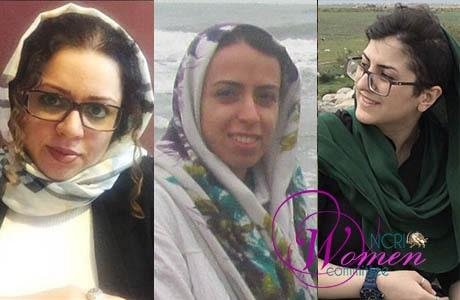 Women’s rights activists linger in jail, no news on their fate

Hoda Amid, a lawyer and a women’s rights activist, was arrested at home in Tehran by security forces on September 1, 2018.

Najmeh Vahedi, another women’s rights activist and sociology graduate, was arrested on the same day at her home in Tehran.
A few days following the arrests of the two women’s rights activists, Rezvaneh Mohammadi, a gender studies student and women’s rights activist, was arrested on September 3, 2018.
Hoda Amid and Najmeh Vahedi were involved in training workshops for women’s rights in marriage contracts and other peaceful activities related to women’s rights.
Najmeh Vahedi has had a brief visit with her mother on September 18, 2018, but there has not been any news about possible family visitations for Hoda Amid and Rezvaneh Mohammadi. Najmeh Vahedi’s brother, who posts updates about her situation on Twitter, writes that their family is still not aware of the reasons for her arrest.
Women’s rights activists have repeatedly faced suppression and threats by security forces in Iran. Protesting against gender discrimination, unequal laws and compulsory veil are considered acts “against national security” and “propaganda against the regime.”
Amnesty International issued a statement on September 3, 2018, warning that the arrests of lawyers and women’s rights activists in Iran signal intensifying crackdown on civil society.
“These latest arrests are a blatant attempt to silence those advocating for human rights in Iran,” said Philip Luther, Amnesty International’s Research and Advocacy Director for the Middle East and North Africa. “The human rights situation in Iran has reached crisis point,” Luther stressed.