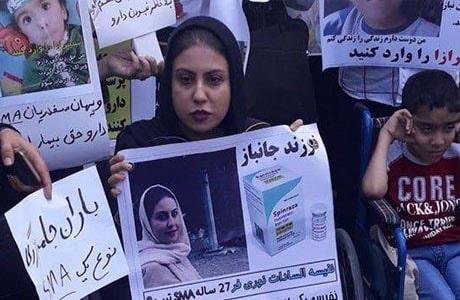 Large number of women actively participated in 10 protests in Tehran

A large number of women participated in at least 10 protests in Tehran in the past few days.

Defrauded clients of the Caspian Credit Institute held protests on Monday and Tuesday, September 24 and 25, 2018, in front of the Monetary and Banking Crimes Court on Fatemi Street in Tehran. A large number of women participated in these protests and loudly shouted chants against the corrupt Caspian institute.

Employees of the Edalat Stocks Cooperative, including a large number of women, held three days of protests September 23-25, 2018. The protests were held across from the Privatization Organization building in Tehran.

Also on Tuesday, September 25, 2018, a group of members of the Retiree Union, teachers and civil rights activists as well as a group of members of the Syndicate of Workers of Tehran and Suburbs Bus Company gathered at the residence of political prisoner and teacher, Mohammad Habibi. The visit had been planned simultaneous with the beginning of the school year as a show of solidarity with the imprisoned teacher. A number of female teachers and retired educators participated in this gathering.

Mohammad Habibi, a member of the board of directors of Tehran’s Teachers Association, was arrested on March 3, 2018, by IRGC forces. He was brutalized in front of his students at school and taken to prison after his house was ransacked.

On Monday, September 24, 2018, women educators of the Literary Movement held a protest in front of the Ministry of Education against the regime’s hollow promises and failure to implement parliamentary.

At the same time, a group of SMA patients and their families gathered in front of the Ministry of Health. Coming from different provinces, they protested the ministry’s failure to follow up on the treatment of SMA patients and procurement of their medications.

A large number of women participated in all of the above protests.

Mehrnaz Haghighi, MD, taken to jail to serve her sentence