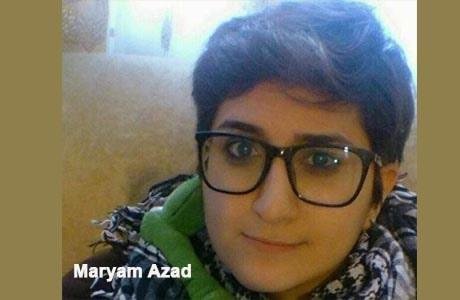 Arrests of women continue in Iran. Afsaneh Khorsandi and Maryam Azad were arrested on Wednesday, September 26, 2018, in Mahabad of Iranian Kurdistan, and in Tehran.

Intelligence agents in Mahabad raided the residence of Afsaneh Khorsandi on September 26, 2018, arresting and transferring her to an unknown location. It is not clear why she was arrested and where she has been taken to.

Afsaneh Khorsandi is the sister of Aram Khorsandi who had been arrested a day earlier by security forces and transferred to an unknown location.

A new wave of arrests of women civil activists and Kurdish activists has been launched by the Revolutionary Guard Corps to intensify the atmosphere of fear and terror in the areas inhabited by Kurds.

At the same time, Maryam Azad, another women’s rights activist from Shiraz, was arrested by security forces. Maryam Azad was arrested at a Tehran Airport as she was leaving the country for Turkey.

An associate of Ms. Azad said she had been arrested by security forces without being informed of her charges. Her arrest took place after she had passed the gate and boarded the plane.

Maryam Azad, 31 and a graduate of Dramatic Arts, was very much interested in performing in plays but was not able to continue in this profession due to the illness she is being treated for.

Earlier, women’s rights activists and advocates, Hoda Amid, Najmeh Vahedi and Rezvaneh Mohammadi were apprehended in the wave of arrests of women activists and lawyers. After nearly one month, they are still detained under undetermined status, denied access to legal counsel and bascially deprived of having family visits.

Amnesty International issued a statement on September 3, 2018, warning against the arrests of women including lawyers and women’s rights activists in Iran, saying it signaled intensifying crackdown on civil society in Iran.