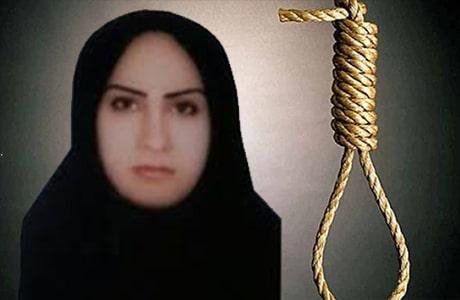 Zeinab Sekaanvand was hanged a few hours ago in the Central Prison of Urmia, as tweeted by her brother. He said her body has been handed over to their family.

Zeinab Sekaanvand is the 84th woman to be executed under Rouhani. She was only 24 at the time of execution.

Zeinab Sekaanvand was from a small village in Makou, in Western Azerbaijan Province. She had been forced into marriage at the age of 15. She lived two painful years, being battered everyday by her husband. She was arrested on the charge of killing him at age 17.

This Kurdish woman was a minor under 18 years of age at the time of committing the crime. International laws ban execution of minors. Zeinab Sekaanvand was a victim of poverty and the misogynous laws os the clerical regime which allow early and forced marriage of girls.

The Women’s Committee of the National Council of Resistance of Iran strongly condemns the execution of Zeinab Sekaanvand. On the eve of the World Day against the Death Penalty, the NCRI Women’s Committee urges international authorities and organizations defending human rights and women’s rights to intervene to stop the incessant trend of executions in Iran.

Last night, October 1, 2018, Amnesty International issued a statement warning that only a few hours remain to halt the execution of Kurdish Iranian prisoner Zeinab Sekaanvand in the Central Prison of Urmia. The clerical regime, however, sent the young woman to the gallows without heeding the international calls.

Zeinab Sekaanvand went on hunger strike on October 11, 2016, along with four other women in protest to the prison guards raiding their cell and confiscating their few belongings including their blankets in the freezing cold of winter.

Earlier, another woman had been hanged in the Central Prison of Urmia on July 4, 2018.