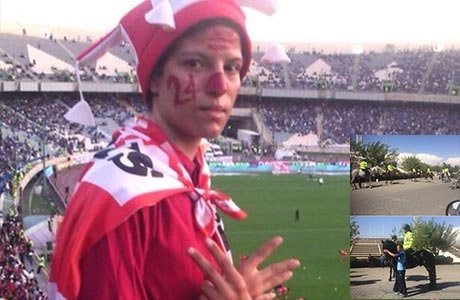 Female police and mounted police officers were deployed to prevent women from entering the Azadi Stadium in Tehran to watch the game on Thursday, September 27, 2018, between Persepolis and Esteghlal teams.

According to other reports, 500 CCTV surveillance cameras were used to identify and prevent women from entering through the gates.

Despite tight control by the State Security Force, a brave girl was able to enter the stadium with a boyish make-up to watch her favorite team in person.

Regarding the ban preventing women from entering sports stadiums in Iran, Makarem Shirazi said, “This plan was also put forward in the previous government, but both the leadership and the authorities opposed it, and unfortunately despite having knowledge of this issue, some are still seeking approval of the directive. Mentioning this issue again will be a deviation from our path.” (The state-run ISNA news agency – November 28, 2017)

Mullah Nouri Hamedani also tried to justify the ban on women’s presence in sports stadiums saying, “It is not permissible for men and women to be present in the same sports event because women cannot properly hold on to their veil.” (The state-run Razavi news agency – November 29, 2017)

Last May, several women who tried to enter a stadium in Khorramshahr with male outfits and make-up, were identified and arrested. (The state-run Aftab website – May 3, 2018)

In the same month, during victory celebrations of Qaem Shahr’s textile team, a woman who tried to go to the top of a power post to look into the stadium, was abusively insulted and attacked by government officials.