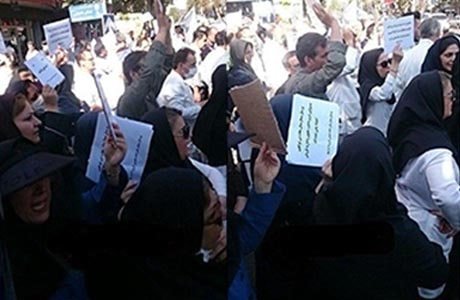 Iranian women actively participated in the recent protests of various sectors of society in the cities of Tehran, Karaj, Rasht and Bam. The employees of Khomeini Hospital in Karaj stopped working from September 29 to October 3, 2018, for five consecutive days, in protest to the nonpayment of 11 months of their salaries. Women actively participated in this protest. They chanted, “Karaj does not need a shopping mall, it needs a medical center.”

The women who work in the hospital, including nurses, doctors, and the rest of the staff, have repeatedly protested against their undetermined situation. Previously, on July 23 and 24, 2018, the employees of the Khomeini Hospital in Karaj held a sit-in for two days at the emergency department of the hospital in protest to the nonpayment of their salaries.

A group of women and men defrauded by the IRGC-backed Caspian Credit Institute in Mashhad, gathered outside the company’s branch on Vakilabad Ave. on Wednesday, October 3, 2018, demanding a response from officials to their inquiries.

On Sunday, September 30, 2018, clients plundered by the Caspian Credit Institute held a protest gathering outside the mullahs’ parliament in Tehran. Women actively participated in this protest. They chanted, “The government is not Muslim, they should return our money.”

On the same day, the applicants for the Adineh Residential Housing Complex in Rasht held a protest against the 8-year delay in the assignment of the complex units. They protested against the plunder of their advance payments for these units by the city’s Friday prayer leader.

On Tuesday, October 2, 2018, Ph.D. students held a protest gathering outside the Ministry of Sciences, Research and Technology in Tehran, inquiring about their demands for student-rate foreign currency. Women actively participated in this protest.

Students of the University of Tehran held a protest on Wednesday, September 26, 2018. Young women actively participated in this protest against university’s demanding tuitions for compensation courses. One student said the university wants to compensate for its lack of funding in this way, and we are protesting their ways.

The students held up banners that read, “Brain drain from Iran is a result of ungratefulness and disrespect,” “No to forced payments.”

Also, on Tuesday, September 23, 2018, women actively participated in a protest by a number of workers in the Sepehr Cooperative Company in Bam. These workers were victims of devastating Bam earthquake in 2012.