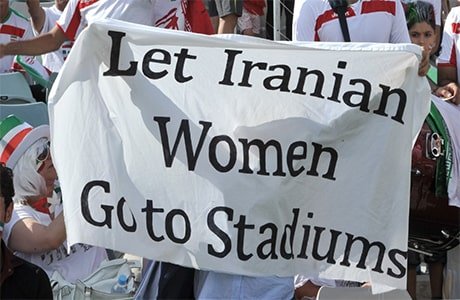 President of the World Federation of Football Federation (FIFA) sent a letter to the Iranian regime, demanding an answer for lifting the ban on women entering sports stadiums in Iran. This is the third letter sent to the clerical regime on the basis of the promise made by Hassan Rouhani on lifting the ban on female fans to attend matches in stadiums.

Last March, during his meeting with Rouhani, Giovanni Vincenzo (Gianni) Infantino, President of FIFA called for a solution to the problem of women entering sports stadiums and watching matches. The meeting was attended by the Minister of Sports and Youth, Massoud Soltanifar as well as Mehdi Taj, the President of FFIRI.

Infantino said at the time that Rouhani had promised that women in Iran will have access to football stadiums soon and there were plans to allow women attend football matches in the country, soon.

The FIFA President had also recently written in a letter to the Iranian Football Federation that if the problem of broadcasting the women’s tournaments in Iran were not resolved, he would not travel to Iran any more. (The state-run Fars News Agency – October 1, 2018)

After a meeting with the Minister of Sports on May 7, 2018, Ahad Azadikhah, a member of the parliamentary Sports Commission, had stated that the problem of women entering indoor sports arenas during matches such as volleyball, basketball and athletics have been resolved. However, on the eve of Iran’s hosting of the volleyball league, it became apparent that the ban was still in place.

Preventing women’s entry to sports stadiums and volleyball matches has been formally imposed by law enforcement officers since 2013, and since then, this problem has never been resolved for football stadiums and even women’s sports venues.

A number of government officials and religious scholars, including Makarem Shirazi and Nouri Hamedani, have emphasized on the ban on women’s entry into sports stadiums in Iran.

Neda Yusefi sentenced to one year in prison and 74 lashes