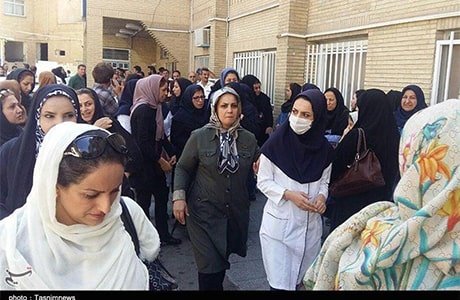 Karaj hospital staff and personnel, most of whom are women, have resorted to selling kidneys due to the nonpayment of their 11 months of salary arrears.

Ghadir Mahdavi Kelishemi, a member of the City Council in Karaj, explained the bitter catastrophe that is taking place for the Karaj hospital personnel. In the beginning of the formal meeting of the Karaj City Council on Wednesday, October 3, 2018, Mahdavi said, “I came up with disturbing scenes upon entering this health center. The personnel have resorted to selling their kidneys due to several months of nonpayment of their salaries. They were very unhappy about not being able to pay their rents or their children’s tuition fees for several consecutive months. Of course, they are right to be so.” (The state-run ISNA news agency – October 3, 2018)

Attempting to play down the crisis, he said, “The first step to quell the problems is to pay at least part of the personnel’s arrears, so that their living conditions could partially return to the normal cycle and they could provide decent services to the public.”

Mahdavi also pointed to mismanagement at the hospital and said, “The hospital has about 40 billion toumans worth of advanced and modern equipment, some of which have not yet been used and have not even been opened from the package. Unfortunately, in the present situation, many of the specialized departments of the hospital are closed down. Only about 3% of the capacity of the hospital beds is active. The hospital is not making use of its unique equipment and exclusive facilities, keeping them in idle condition while Karaj is engulfed in health and medical problems.”

Meanwhile, on Thursday night, October 4, 2018, the president of the Karaj hospital announced that the hospital is closed due to lack of basic materials for treatment of patients.