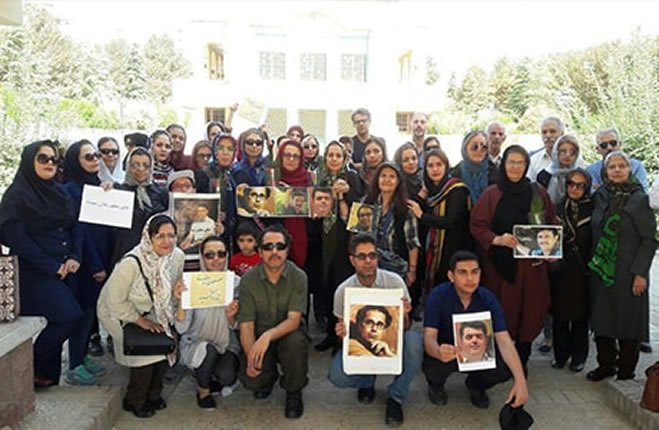 On Friday, October 5, 2018, female teachers participated in protest gatherings in Tehran, Kazerun and Alborz Province on the occasion of the International Teachers Day. The role of female teachers in these gatherings was prominent.

Mrs. Khadijeh Pak Zamir, the wife of imprisoned teacher Mohammad Habibi, told the gathering, “I hope that all teachers, freedom-lovers and justice-seekers will soon be released from prison.”

Mohammad Habibi is a teacher and a human rights activist who is currently imprisoned in the Greater Tehran’s Central Penitentiary.

The International Teacher’s Day ceremony in Alborz Province was held with the participation of male and female teachers along with the family of Esmail Abdi, an imprisoned teacher and leader of the Iranian Teachers’ Trade Association (ITTA).

In Kazerun, a group of teachers and educators gathered outside the Department of Education in this city. Female teachers were active in this protest.

On Saturday, October 6, and Sunday, October 7, 2018, a group of employees of the Edalat Stocks Cooperative gathered in front of the building of the Ministry of Economy and Finance in Tehran and held a protest rally against the uncertainty about their job status and wage arrears. In this gathering, the active presence of women was impressive.

At the same time, a group of male and female students of the Farhangian-e Kowsar University in Yasuj held a protest rally opposite the Yasuj Governorate, in protest to the deplorable sanitary conditions of the dormitories.

In another protest gathering on Friday evening, October 5, 2018, a crowd of women and youth in Kermanshah, who witnessed the arrest of a young person and the acts of violence by law enforcement officers, chanted out their protest with slogans of “Shame, Shame!” and forced the police to flee the scene.

Iranian women have actively participated in more than 430 protests between March and September 2018.