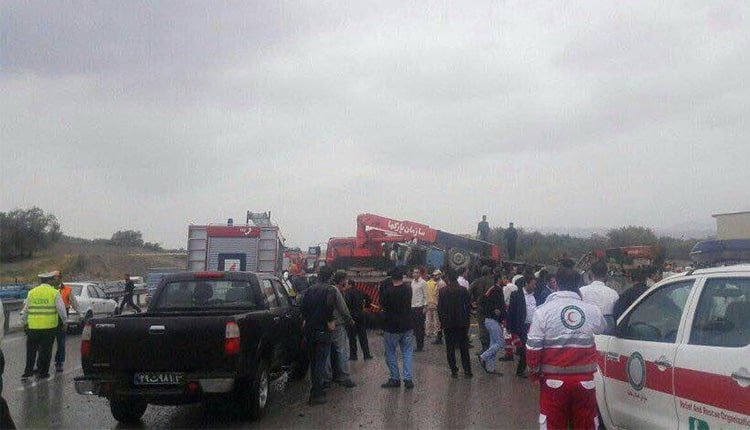 The bus carrying girl students to a compulsory camp, called Rahian-e Noor, crashed on the Tabriz road on October 10, 2018. Two girl students died in the accident and more were injured.

The bus carrying 40 secondary school girl students was heading to Tamarchin, in West Azerbaijan Province, when it started to rain. Slippery road caused the crash at the entrance to the city of Tabriz. (The state-run ISNA News Agency – October 10, 2018)

These compulsory camps, aimed at promoting fundamentalist culture and brainwashing students, are held every year at high expenses. While the government does not care for the lives of girl students, they hold these mandatory camps on an annual basis, despite severe roads condition in Iran where millions of people lose their lives every year.

Global organizations have described Iranian roads, as roads of death.

Elite student Sara Ayineh was among the 27 victims of a horrendous bus crash in Sanandaj, capital of the Iranian Kurdistan Province in western Iran on July 11, 2018, when an IRGC fuel tanker crashed into the students’ bus . Sara Ayineh studied biology at a high school for talented students and had passed the exam for the first stage of Science Olympiad for the 2017-2018 academic year.

Last December, a bus carrying girl students from Susangerd traveled through war-torn areas under the pretext of a scientific travel. The bus crashed and four girl students and a female teacher were killed. According to government officials, six people died in the accident and more than 11 people were reported as injured. (The state-run Tasnim news agency – December 12, 2017)

This is not the first time that students die in an accident involving buses carrying secondary and college students.

In another incident on March 17, 1998, a bus carrying students from Sharif University of Technology fell into a steep valley killing seven students and two faculty members of the university. Maryam Mirzakhani, a mathematics genius, was one of the survivors of the incident.