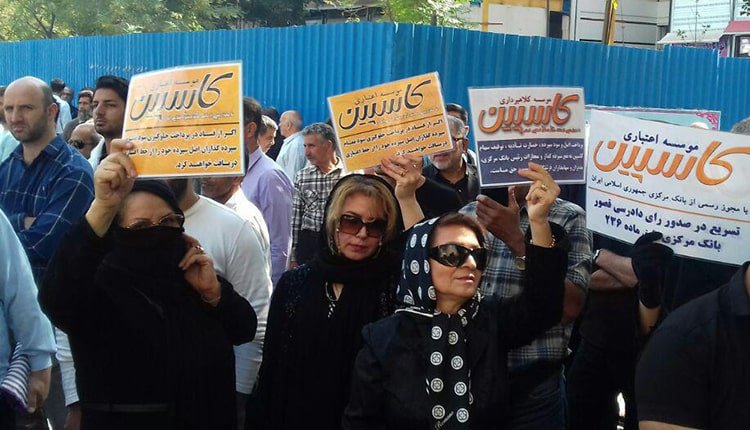 Women participated actively in protest gatherings held over the past week in Tehran, Rasht and Takestan.

On Wednesday, October 10, 2018, the families of students at the Sama Girls’ School in Takestan held a sit-in protest against illegal and substandard blood taken by a couple of syringes from 40 children by an unidentified person posing as a Red Crescent (Hilal Ahmar) employee.

The sit-in protest was held in the prayer hall and a number of the families also gathered in front of the Health and Medical Care Network in Takestan.

Despite several hours of protest by the families, no government official from the Department of Education, the Governorate, or the parliament came to hear the families. The protesting families demanded a response for the illegal act of taking blood from 40 girl students by a few used syringes ostensibly by a Red Crescent personnel.

On Tuesday and Wednesday, October 9 and 10, 2018, employees of the Edalat Stocks Cooperative continued their protest gathering since Saturday, October 6, against the cooperative’s failure to pay 43 months of their salaries.

The protesters held up a symbolic coffin above their heads to show their protest. On Tuesday, they gathered in front of the Ministry of Economy and Finance in Tehran. Women played an active role in the five-day protest of the employees of the Edalat Stocks Cooperative.

On Tuesday, October 9, 2018, a group of defrauded investors of the Caspian Credit Institute in Tehran held a protest gathering in front of the Public Prosecutor’s Office. Women stood alongside men in this protest, demanding reimbursement of their plundered deposits.

On Monday, October 8, 2018, a group of plundered clients of the Caspian Credit Institute in Rasht, mainly women, staged a protest gathering.

Also on Monday, October 8, a group of students from Tehran’s Khajeh Nassir Toosi University of Technology staged a protest against the new policy of obtaining fees from students for dormitory services.

From March to September 2018, Iranian women have actively taken part in over 430 protest gatherings in cities across Iran.