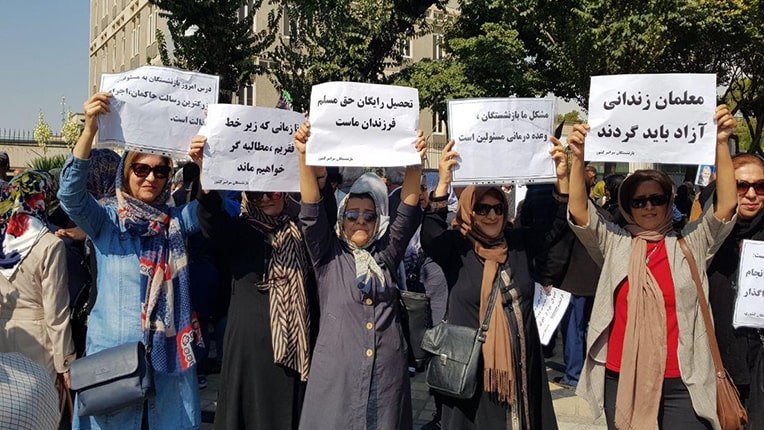 Iranian women partake in the protests of various social sectors

Several protests took place from Sunday, October 14, until Tuesday, October 16, 2018, in various cities where Iranian women participated and played major roles in protesting against the corrupt policies of the mullahs’ regime.

Hundreds of retired personnel staged a big rally outside the Budget and Planning Organization in Tehran. Veteran nurses and health personnel were also among the protesters and Iranian women played a remarkable role in this protest. They chanted, “Poverty line is 6 million toumans, our salaries are 2 million.”

On the same day in Isfahan, girl students planning to take part in the university entrance exams, gathered outside the Department of Education in protest to short notice for the exam. They said, “Our generation will not sit silent and let you do to us whatever you want!” Since no one appeared to respond to their demands, they cried out and called on the officials, “Get up (and come out) from behind your desks!”

On Monday, October 15, 2018, under heavy rain, a group Iranian women, victims of the Caspian Credit Institute gathered in front of its branch office in Rasht and called for the return of their deposits. They chanted, “So long as our money is gone, it will always be like this” and “We’ve been plundered, we have no money, we have tables, we have no food.”

On the same day, a group of looted Caspian Credit Institute investors, including a number of women gathered in front of the Central Bank of Iran on Mirdamad Street in Tehran and staged a protest. Protesters held banners and chanted, “The bankrupt state is sitting on our money!”

Also on Monday, a group of plundered investors of the Persian Pars Company in Tehran, including a number of Iranian women, gathered in protest outside the General and Revolutionary Prosecutor’s Office.

Some 250 of the personnel of the Hospital of Karaj, including a large number of women, resumed their protests on Monday to achieve their demands.

Students of the Department of Social Sciences of the University of Tehran, gathered in the college’s lobby on Monday, October 15, to declare their solidarity and support for the teachers’ national sit-ins and strikes. The protesting students, including a considerable number of young women, held up signs which read, “Students, teachers, workers, unite, unite” and “free imprisoned teachers” and “free imprisoned students” and “So long as teachers are in jail, classes will be closed.”

Iranian teachers held a nationwide strike and sit-in on Sunday and Monday which spread to 26 out of 31 Iranian provinces and at least 61 cities.

Also on Monday, October 15, 2018, students of Azad University of Sanandaj held a protest rally in protest against the removal of midwifery and nursing majors after a week in class. Female students had a leading role in this protest. The students said that most students omitted from the majors have a student card and number, they have paid tuition, and have also been in the classroom for one week.

In another protest on October 15, workers of the Municipality of Shushtar including a number of Iranian women stopped work to protest against the city’s failure to pay their wages.

On Sunday, October 14, 2018, students of Tehran University staged a heated protest against Rouhani, the mullahs’ president, who was speaking to a group of selected students in one of the university’s halls. The student protested the arrests of their fellow students and the heavy sentences issued for them. One of the young women participating in the protest, cried out, “Why didn’t you let the students in?”

Baha'i women continue to get arrested and dismissed for their faith