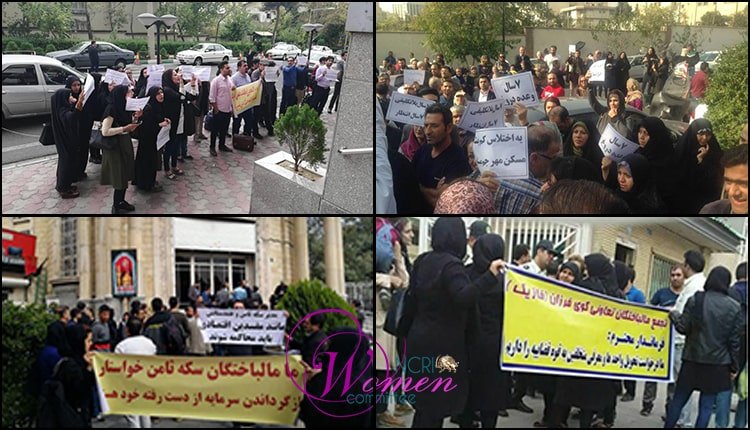 Women actively participated in the protest gatherings of different social sectors in mid-October, including the protests by university students and plundered clients of fraudulent credit institutes.

On October 21, 2018, some 400 housing applicants held a protest in Tehran’s Vanak Square to demand their units. They rallied outside the building of the company in charge of Construction of New Cities in Iran.

On Saturday, October 20, 2018, a group of protesters gathered outside Tehran’s Revolutionary and Public Prosecutor’s Office. Women actively participated in this protest by clients swindled by the Sekkey-e Samen Company.

Also on October 20, Iran’s second largest city, Mashhad, saw the protests of defrauded clients of Padideh Shandiz. Women actively participated in this protest gathering, demanding their plundered money. The protesters gathered outside the place where Padideh Shandiz CEO was holding his press conference.

Meanwhile, another group of men and women gathered in protest outside the Governorate of Qods City also on October 20, and demanded their belongings plundered by the Kouy-e Farzan Coop.

Ph.D. students from various Iranian universities gathered outside the building of Research and Technology Sciences Ministry in Tehran on Saturday, October 20. The protesters, including girl students, had problems with the dollar exchange rate for their studies.

A group of students of Tehran’s University of Art held a protest on October 16, 2018. They held placards declaring support for workers and the teachers’ nationwide strike and sit-in. They also demanded freedom of political prisoners, including students who have received heavy jail sentences.

Iranian women actively participated in at least 430 protests by various sectors from March until the end of September 2018.