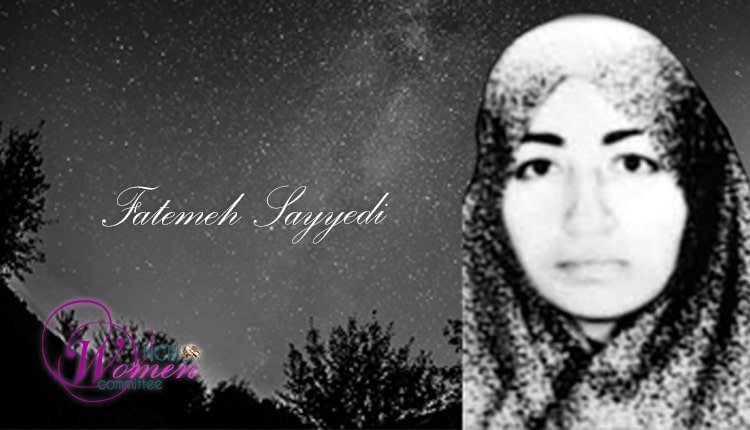 Fatemeh Seyyedi was from Tabriz, in north-eastern Iran.  She was a pharmacy student at Tabriz University.

She became politically active during the Shah’s reign, following in the footsteps of her brother, Sadegh Seyyedi, who supported the Mojahedin (PMOI/MEK). After her brother’s arrest by the Shah’s security services (SAVAK), she began to meet families of other political prisoners hence her network and activities expanded beyond her university.

After the anti-monarchic revolution in 1979, the PMOI/MEK movement became prominent in Tabriz where she was one of the officers in charge.

Fatemeh’s warm, kind, and loving character alongside her strong and charismatic personality allowed parents, especially mothers, of other political prisoners to confide to her as they found her a reliable and supportive person. Every time she met parents who were either in search of their young innocent injured children whether in hospitals or prisons, Fatemeh Seyyedi became more determined to stand against the brutal, violent, and unjust regime.

In 1981, when the regime began its flagrant crackdown on the Mojahedin, it became increasingly difficult for Fatemeh Seyyedi to continue her political activities in Tabriz since she was well-known. Therefore, she decided to move to Tehran to continue her activities.

In Tehran, however, the Revolutionary Guards attacked the house where she and some other members of the PMOI/MEK stayed on May 22, 1982. Fatemeh Seyyedi was injured and arrested.

Prison was another formidable test for Fatemeh Seyyedi.

The officers of Evin prison used a variety of mental and physical tortures in hopes of breaking her, but she endured through them patiently and never betrayed her compatriots.

Fatemeh Seyyedi’s sister recalls the very last time she heard her voice over the phone, explaining how happy and cheerful she was, leading her family to believe that she must have been sentenced to a few years in prison. Little did they know this would be their last conversation.

The day after their phone call, Fatemeh Seyyedi’s family was informed that she had been executed. They were given an approximate address and a few signs of where she was buried in Tehran’s Behesht-e Zahra Cemetery.

Following are excerpts from a letter written by an MEK supporter, after the execution of Fatemeh Seyyedi: “On the day of Fatemeh’s execution, I was in Behesht-e- Zahra, and I realized that a number of executed women were taken to the funeral home to be washed (according to Islamic rules) prior to their burial. I went inside the funeral home and recognized Fatemeh among all the corpses. I noticed that something was written on her leg.  When I went a little forward I could read it: ‘We were 50 prisoners and were all raped before execution.’”

Fatemeh was executed on October 29, 1982, after having endured long and harsh physical and psychological tortures of Khomeini’s mercenaries and hangmen.

Fatemeh Seyyedi belonged to a generation of brave women who chose to resist against the oppression of a theocratic regime; a generation which courageously faced torture and death for believing in freedom for all Iranians.